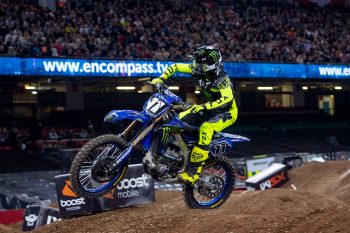 A flat tire for Kyle Chisholm proved costly in his bid for a strong SX2 result in Wales as the CDR Yamaha Monster Energy rider ultimately finished the 2022 World Supercross Championship (WSX) opener P19 after misfortune in the finals.

Cardiff marked the 34-year-old’s debut with the CDR outfit and he qualified ninth before finishing sixth in heat number one at Principality Stadium.

Chisholm made a great start in the first final and was running P2 until disaster struck in the second half of the race when he got a flat tire from the finish-line ramp that forced him out of the outing. A first-turn incident in race two impacted his charge on the way to 17th, and then he completed the event with a P13 finish in the super final.

“My first time working with the CDR Yamaha team was awesome, as I expected, so I am really thankful for that even though we didn’t get the results this weekend,” Chisholm explained.

“There were a few unfortunate things that happened to me, but that’s racing, and I feel like we showed what we could do in that first main event when I was able to run second for much of it.

“Unfortunately, I hit something in the track and got a flat tire, which caused me to go down pretty hard, and then in the second main event I got stuck in a first-turn crash.

“In the end, I know I can run up front and battle for the win – tonight was just crazy with so much going on! I’m happy with what we’re capable of doing, so I need to put it up front in Melbourne like I showed that we can do.”

Chisholm will have an opportunity for redemption when WSX moves to Marvel Stadium, Melbourne, Australia on 21-22 October for the second and final round in its ‘pilot season’.