All indications round two still on the cards for CRF450R rider. 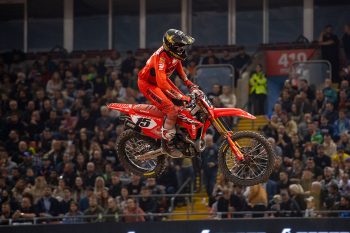 Freshly-minted Honda rider Dean Wilson leaves the opening round of the 2022 World Supercross Championship (WSX) with a ‘small AC separation’ following a last-lap crash during the second final in Cardiff.

Wilson switched to a CRF450R with Honda Genuine Honda Racing following a multi-year stint with Rockstar Energy Husqvarna in the US and finished his heat race P6 at the opening round of the WSX.

Charging his way forward from outside of the top 10, the number 15 completed the opening final in eighth before a late incident in final number two saw Wilson brought down after he was cross-jumped on an on-off section, hurting his shoulder.

He did not line up for the super final after the incident but all indications suggest Wilson is planning to compete at round two in Australia on 21-22 October.

“I’m pleased to walk out of here in one piece,” Wilson explained. “It was a rough weekend! There were some positives to take and I am excited about how I feel on my CRF450R, but I just need some more time to make sure that I am battling where I belong.

“We have a couple of weeks before Melbourne, so we will get back to work! Just a small AC separation so we will be good”