Further scans and surgery to be organised for Australian legend. 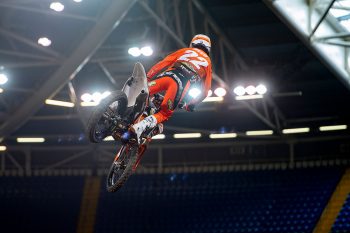 A heavy heat race fall during the opening round of the 2022 World Supercross Championship (WSX) in Cardiff left Australian legend Chad Reed with multiple injuries including broken bones and a dislocated shoulder from the impact.

After retiring at the conclusion of 2020 American Supercross, Reed announced a comeback with MDK Motorsports for the new series this year.

The 40-year-old posted the 11th fastest time in WSX combined qualifying at Principality Stadium and was running inside the top six in heat two when he crashed hard in the on-off section, later indicating a fuel pump fault as a cause for the incident.

Unfortunately, it’s been confirmed that Reed sustained a broken left hand, broken ribs and dislocated right shoulder from the fall, effectively ruling out a competitive appearance at round two of the championship in Australia with further x-rays, CT scans and surgery to be organised.

“I’ve loved the past 12 or so weeks getting to challenge myself,” Reed shared. “It brought realization to just how awesome Supercross as a sport is!
Also has made me acknowledge how soft and fearful most people live, blows my mind how threatening a 40-year-old retired guy enjoying a little grind and a few races can be to some.

“What happened last night is unacceptable and I don’t care if you’re 16 or 60 years old, no one should have to be concerned a fuel pump will go out while enjoying your favorite sport! I’m frustrated, mad and beyond disappointed with being broken.

“But you just have to dig in and ask the right questions, try to implement things to eliminate the issue happening again. These broken bones feel no different from my first broken bones at 10 years old.”

WSX resumes in under two weeks at Marvel Stadium, Melbourne, Australia on 21-22 October for the second and final round of its ‘pilot’ season.