Next year’s WSX Championship expected to be at full-length

'The whole purpose of the pilot season is to test and learn'. 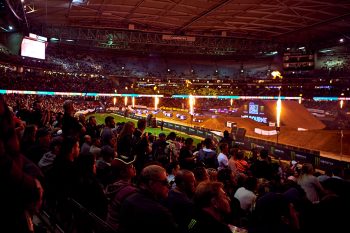 SX Global expects that next year’s World Supercross Championship (WSX) will reach its intended full-length after conceding that the 2022 pilot season will span just two rounds after initially targeting as many as five.

A scheduled third round of Indonesia fell through in the past month after SX Global managing director – motorsports Adam Bailey visited Jakarta to assess the possibility of it going ahead.

With the venue not meeting standard requirements to host the brand new FIM-sanctioned series, a decision was made to focus on the WSX British and Australian grands prix, despite brief discussions to make Melbourne a double-header. It’s understood the 10 licensed teams couldn’t unanimously agree on that option.

While recent communications indicate that WSX will form ‘up to 12 events’ in 2023, Bailey has suggested that there will be no more than 10 in total. SX Global has maintained its messaging that the series will operate between June and November annually.

“The whole purpose of the pilot season is to test and learn – the last thing you want to do is anything sub-standard or anything less than awesome, really,” Bailey told MotoOnline. “We had a third round planned for Indonesia and I went to visit there recently, but unfortunately it just wasn’t ready. The venue wasn’t going to be up to scratch for what we’re expecting to achieve.

“We decided to focus on the two, make them incredible, and also focus on 2023. Next year’s still going to be a building year and we plan on building over the next three years, in terms of the length of the series. We’re not going to be over 10 rounds next year, that’s for sure. It’s all coming together at the moment and we’re working heavily towards that.”

Still, Bailey is certain that the upcoming rounds this month – if only two – are on par to be successful, which is crucial if SX Global is going to set itself up for a complete season at the highest possible level in 2023. It’s unclear if Indonesia will still be on the radar.

“We’re expecting over 30,000 people in Cardiff and over 45,000 in Melbourne across the two days, so we’re really excited and are pumped to get underway,” he concluded.