Transfer from Team HRC to KRT now official ahead of 2023 season. 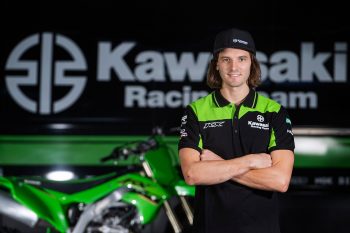 Australian Mitch Evans has signed with the Kawasaki Racing Team for the 2023 MXGP World Championship as teammate to Romain Febvre.

The 23-year-old exited Team HRC following last month’s Motocross of Nations (MXoN) and his future is now confirmed aboard the factory KX450SR.

“I’m looking forward to the prospect of working with Antti [Pyrhonen] and the Kawasaki Racing Team,” Evans said. “Already from the initial talks they got me really excited about the faith they have in me and the support they can offer.

“I immediately sensed that they believe in my potential and they have the package which can take me to the next level and I want to thank everyone at Kawasaki for that. I made some good progress from my injuries this season just gone and now I’m looking forward to putting in the work during the off-season so that I’m ready to race for wins and podiums for Kawasaki next year.”

KRT team manager Antti Pyrhonen added: “We are definitely looking forward to working with Mitch. He has shown that he is a great talent and he has the racing spirit and charisma to succeed. I have been impressed at the way he has fought his way back up the ranks step-by-step to become a real contender after missing more than one year through injury.

“He has shown the fighting character to race right up at the sharp-end on several occasions, even winning the qualifying race in Sweden. Mitch has proved that he is here to make a statement and succeed and he clearly has the determination which an athlete needs. With his ability, fighting spirit and hard work we are convinced that he can become a genuinely serious contender with Kawasaki.”