Lightweight class talent to compete aboard YZ250F in 2023. 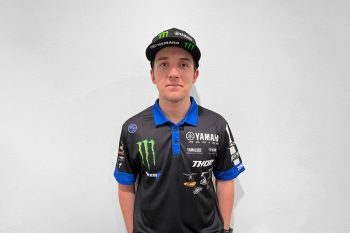 Quarter-liter contender Stilez Robertson has inked a deal with Monster Energy Yamaha Star Racing that will see him compete with the powerhouse outfit onboard a YZ250F for the 2023 Monster Energy AMA Supercross and Lucas Oil Pro Motocross seasons.

Following immense success in his amateur career, the 20-year-old stepped up to the pro ranks after the 2020 AMA Monster Energy Amateur National Motocross Championship at Loretta Lynn’s Ranch.

Although injuries have impacted Robertson throughout his professional stint, he achieved a pair of seconds at Daytona Supercross in the past two seasons, also scoring an overall podium at RedBud in 250MX this year before an ankle injury sustained in Millville forced him to the sidelines. Back on the bike, Robertson has completed his first laps aboard the Yamaha ahead of next year.

“I’m really excited to be joining Monster Energy Yamaha Star Racing,” said Robertson. ” I’m looking forward to working with the team, and I’m focused on getting some results for them and myself. Their history speaks for itself, and I’m honored to be a part of the team.”

For 2023 a new-look Monster Energy Supercross Championship schedule has been released and Pro Motocross will be reduced to 11 rounds, making way for the new SuperMotocross World Championship playoffs.