Input: Coming together for SMX

For the first time in the extended history of Monster Energy Supercross and Pro Motocross, both series will combine for the SuperMotocross World Championship (SMX) from 2023. The initiative is set to add an intriguing new dynamic to the landscape of the sport, with key leaders in the merge providing their Input on the coming together for SMX. 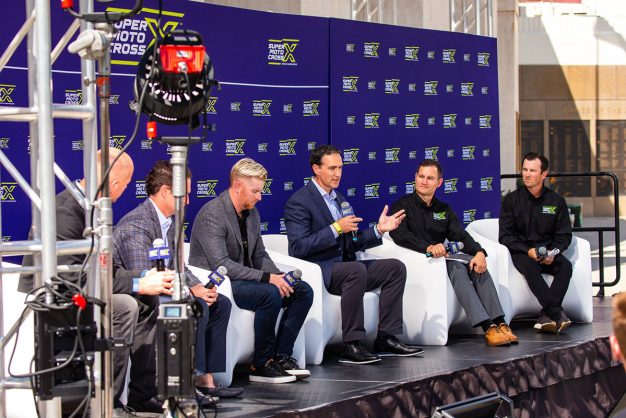 Kenneth Feld (Feld Entertainment chairman and CEO):
We started over two and a half years ago, covid had hit and we got notified after we had completed the first half of the Supercross season that everything around the world was shut down. We were determined to figure out how we could complete the season, and what happened was from March until June, we couldn’t operate and we were just trying to figure out our way. Carrie and I and our teams were getting together on how can we preserve our season and how can they make sure that they can have a full season of Pro Motocross. We figured it out, we had the last seven races in Salt Lake City with no audience live in the seats, but we had all of the riders, all of the teams and we were able to complete the seven final races. By doing that, we became the first pro sports league to complete their full season. Carrie started almost immediately after that and she got through her whole season. Through that, we had constant talks and we were working with each other to figure out how can we do this, all of the testing protocols – everything else that you all went through. Out of it came, ‘you know what, we really like each other’. It was great working with them, so what could we do to grow the sport? Out of that came the idea and the concept for SMX – SuperMotocross and the playoffs and everything else, it’s been over two and a half years. I really have to give a shoutout to all of the OEMs, we talked to everybody in this process to get feedback, to get input from our riders and our sponsors. We wanted to have everybody be a part of this, because… it’s interesting Carrie and I have a lot in common. Basically, we are both second generation in businesses that are over 50 years old. It’s just our nature to have a very long-term view of what we are going to do. We are working together, we are going to have this year [2023] and then we are going to continue on and we hope this becomes not only so exciting but becomes a legacy of what this sport is, where it is a lot more unified. 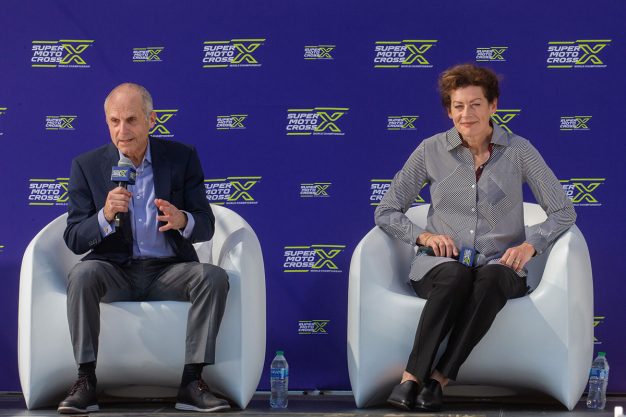 Carrie Coombs-Russell (MX Sports Pro Racing CEO):
I was really encouraged once Kenneth got involved. Initially, Dave [Prater] and I were talking, and the initial concept was to merge our media platforms. Then we got Kenneth involved, he was so excited and he gave us access to some resources and some relationships that we just didn’t have. We consulted with these experts, and they said your initial concept of merging your media packages, that’s good, but what you need and what the sport doesn’t have is a playoff. Other premier professional leagues have their premier playoff season, they have their Super Bowl – whatever you want to call it – and we don’t have that. Supercross starts, it ends, motocross starts, it ends, and then we sit there kind of dormant for five months, so we looked at each other and went ‘that makes total sense’. So we went to our strategic partners, went to our OEMs and said we have this idea, the playoffs… Then it got really exciting, then it was how many playoffs? Where are they going to be? What’s the track going to look like? It’s got to be a hybrid – a version of supercross and motocross. How many riders are going to be there and oh, the purse, which turned out to be a really big deal. It all evolved over the last two years as Kenneth said and now we have the SuperMotocross World Championship. We believe it is the ultimate off-road motorcycle series, we are very happy.

Dave Prater (Supercross vice president):
We’re excited about this new concept and really a unique track that these guys aren’t typically used to. They are typically used to a bike set-up for a supercross track or bike set-up for a motocross track and the physicality that comes along with both. The interesting thing with the venues we have been looking at, obviously we are here at the LA Memorial Coliseum, it’s iconic, but the other thing that it has is an extremely large floor. The fact is we are making these 50 percent supercross, 50 percent motocross, we are going to need larger venues. This flooring here is about one and a half times a typical football field and, obviously, we can race through the isles which everyone knows and loves from the history of this place, so super-excited about that. The track is going to be like Carrie said, a hybrid – it truly is a blend of supercross and motocross for the SuperMotocross World Championship playoffs and world championship final. Looking forward to the next couple of weeks and doing the announcement for playoff one and playoff two, I think everyone will be really excited about those venues. Each venue is unique to itself, somewhere we have never raced supercross or motocross before so looking forward to that, and they are unique venues like I said, they are unlike the other. We are going to have a different style track for playoff one, different style track for playoff two and obviously here with the final at LA Coliseum.