Highly-rated 250SX race winner to continue with team through 2024. 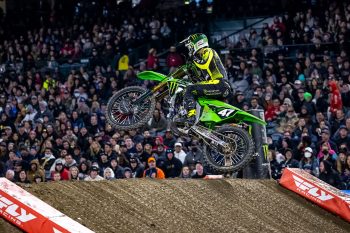 250SX race winner Seth Hammaker has signed a two-year contract extension with the Monster Energy Pro Circuit Kawasaki team, set to remain through the 2023 and 2024 seasons.

The 22-year-old completed his rookie 250SX campaign with the outfit last year and was awarded AMA Rookie of the Year for his western region efforts, including a main event win at Arlington.

However, injuries and his health have affected Hammaker since, missing Lucas Oil Pro Motocross rounds in 2021 and being forced out of this year’s 250SX West series prematurely with back fractures and internal damage. That was after he turned heads with 2-3 results in the opening two rounds.

Hammaker went on to take P7 in the 250MX standings outdoors, despite opting to sit out Budds Creek following a violent crash during the prior round at Unadilla. Returning for the final four races, he ended the year sixth overall at Fox Raceway and now looks ahead to the new year.

“I am super-pumped to announce that I will continue to race for the Monster Energy Pro Circuit Kawasaki team through the 2023 and 2024 racing seasons,” Hammaker announced on Monday afternoon.

“I feel right at home on my KX250 and truly believe this is where I need to be to continue building and achieving my goals! “It has been two years of ups and downs, but Mitch [Payton] and the whole crew never stopped believing in me and I could not be any more thankful for them.”