Debut will take place in next weekend's WSX Championship opener. 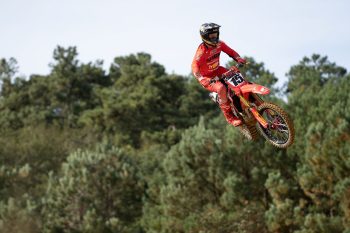 Fire Power Honda has officially announced the signing of Dean Wilson in a multi-year deal that will include Monster Energy Supercross and extend into both the world and Australian championships.

The Australian-owned organization of Yarrive Konsky will return to the 450SX class in 2023 following a year out, with Wilson arriving following six years at Rockstar Energy Husqvarna.

This season saw the team focus on 250SX East alongside its Australian program, however, the signing of Wilson sees Fire Power Honda back in the premier class of American supercross. The team claimed a single podium with Justin Brayton in its lone 450SX campaign during 2021.

Wilson, now 30, has eight 250SX main event victories to his credit and won the 2011 250MX title outdoors. The opportunity to extend his career with Fire Power Honda comes as a welcome one and he will also contest the World Supercross Championship (WSX) pilot season that begins in Cardiff next weekend with the newly-branded ‘Honda Genuine Fire Power Honda Racing’ team.

“I’m very excited to join the Fire Power Honda team in America, as well as the Honda Genuine Firepower Honda Racing squad in WSX,” Wilson said. “The CRF450R is a proven bike and I know that I can achieve a lot with the team of people that is in place here. There is going to be a lot of experience and knowledge under the tent – I’m really happy that I have landed here.”

Wilson’s deal is unique in that he will also ride select rounds of the Australian Supercross Championship (AUSX) this year, before committing to a complete campaign in 2023 since his first child is due this month. However, the team announcement doesn’t specify WSX next year when that series is due to expand from two rounds to around 10.

“If we want to be recognised by sponsors, media and fans then we need top-level riders who are well known,” said Fire Power Honda team manager Martin Davalos. “Signing Dean was a very important step forward for our global motorsports group. We welcome the new challenge of competing in the 450SX class with a top-calibre rider.”

Fire Power Honda team owner Konsky added: “Welcoming a star of Dean Wilson’s calibre is yet another step forward for the squad. We are all really excited to return to the premier class with a podium contender and help Dean achieve more highs.”

In addition to Wilson, the Honda team will field Max Anstie and Wilson Todd in both the upcoming world and Australian championships, before the pair are also expected to enter 250SX in the US next season.

Also as of recent weeks, current MotoConcepts Honda rider Justin Brayton – the defending champion in Australia – has been linked to a return to the team for that series as he targets a fifth-straight crown. That would be in addition to his WSX commitments with MotoConcepts.