Assorted racer comments following the 75th edition of the event.

In Quotebook, a selection of riders detail how their races played out in the 2022 Monster Energy Motocross of Nations (MXoN) at RedBud. Eli Tomac (Team USA) – Second | First nation:
It’s high on the list. It’s hard to put a number on any of these achievements. It’s in its own place. There’s no crowd like this event and the wins just feel different because winning as a team feels different than winning as an individual, so it’s just a different feeling. A good feeling.

Tony Cairoli (Team Italy) – Sixth | Fourth nation:
The starts were important in these kinds of conditions and we did not get it in both motos; in the second race I slipped on the grill with the water and was almost last. I had to come through the pack in both races. I was making decent passes and ninth was good. I’m pretty happy even though we didn’t really get into mix. When I crossed the checkered flag in the last moto I was very emotional because I knew this would be my last pro motocross race. It was hard! I’m happy about the result as I know I haven’t raced since May. No mistakes, no crashes and riding just for fun. It was good.

Dean Wilson (Team Great Britain) – 10th | 10th nation:
It was definitely a challenging weekend. I am definitely stronger in dry conditions compared to what we had today. I had some really bad starts; I felt like I was battling all day. It was just challenging. I am really happy that I did it though, because there is nothing quite like the Motocross of Nations.

Jorge Prado (Team Spain) – Fourth| Sixth nation:
I had a solid day at RedBud! It is always great to race here with such amazing fans. I took sixth with Team Spain and I am happy with that, as we are a very young team and I know that we will improve. I will keep dreaming of a podium with my country. Thanks to everyone for the support!

Mitch Evans (Team Australia) – Ninth| Third nation:
It is great to get on the podium with Team Australia. It hasn’t happened much in our history, so to be part of a team that’s done it is a massive honour. The first moto went well, just rode a nice consistent race and kept a good pace throughout. I knew it was important to get us off to a good start and together with Hunter we did that in race one. Jett and Hunter then did a great race two to give us a solid shot at the podium, and that’s what happened in race three. I would have liked to have done a bit better but it’s motocross and anything can happen, but thankfully we still did well enough to land on the podium. A big thank you to all of the team for the job they did in what ended up being really tough conditions, and I can’t wait to be part of this event again, where we will try to do even better.

Maxime Renuax (Team France) – First | Second nation:
It’s a great feeling. This was not the result we were aiming for; we were here to win. But sometimes these things don’t go as planned; Team USA was very strong today. In terms of my team, I was so happy with the team atmosphere this year. It was like having two big brothers. They gave me a lot of advice, so I want to thank them for that. Personally, this was an incredible day for me. My first MXoN on the 450cc and I won the MXGP class against some really big names.

Jago Geerts (Team Belgium) – Fifth | Fifth nation:
Overall, I am happy about the weekend. It was really fun on the 450. Winning the qualifying heat yesterday was unreal, a little bit unexpected, but really nice. In the first race, I took the holeshot but made a small mistake, which let [Eli] Tomac past me. I was able to follow Tomac for the whole race, so that was pretty good. I was happy with that. In the second heat, I had a good start but crashed twice on the first lap and only got back to 10th. I am still happy with my riding and my first race on the 450, it was just a fun weekend.

Jeremy Seewer (Team Switzerland) – Third | Ninth nation:
I enjoyed this weekend a lot. Especially yesterday, when the track was dry, it was incredible. I had some good racing yesterday. The fans were amazing; it gives you goosebumps. I’d say I had a solid day today. Nothing ‘wow’ but also nothing bad. My riding was pretty good. I was consistent and didn’t make any big mistakes, other than a small tip-over in race one. Other than that, it was a good day, and that’s a wrap on this season, so I am just looking forward to having some days off.

Glenn Coldenhoff (Team The Netherlands) – 13th | Seventh nation:
I didn’t have the best feeling this weekend, although it did get a bit better. I had wheel spin off the gate and then crashed on the first lap, so I had to start from dead last. I got back to 13th. In the second race, I messed up the start again, and then I got landed on by another rider and crashed. The bike was completely bent, and I could not continue. It’s a shame to end the season like this, but I am happy to go home fit and healthy. 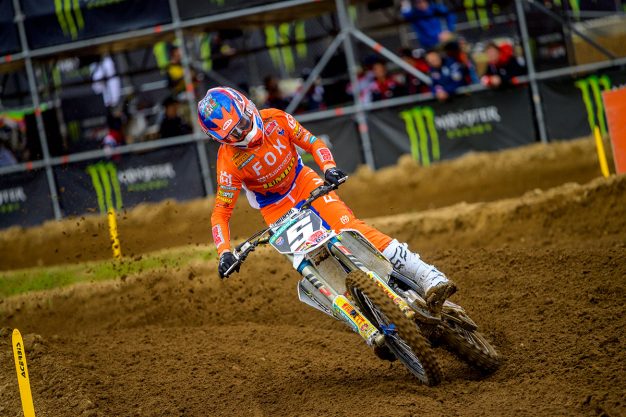 Justin Cooper (Team USA)  – First | First nation:
I really wanted some redemption from 2019. So to put in two solid rides, be the best 250 rider, and give my team the best chance to win was important to me. It’s been 11 years since the last win, so to be on top of my class and be a part of that winning team that ended the drought is really special to me. It’s got to rank right up there with my Supercross championship.

Liam Everts (Team Belgium) – Fourth | Fifth nation:
About the riding: not the best weekend. I need to work on my starts this winter, it’s been a weakness this year and I felt my rhythm was a bit ‘off’ and not at my usual level. I felt like there was more to give but I could not extract it today. The rain made the track better and slower and even though it was not the best of days, I enjoyed being here, representing the team and taking part in the event.

Marvin Musquin (Team France) – Third | Fourth nation:
It was a great opportunity and honor to represent my country. I got the call to ride the 250 while I was on vacation and it seemed a bit crazy but I wanted to go for it, so I trained and prepared and it was definitely a bit easier riding on Saturday compared to Sunday! I had two super-strong teammates. I’m a little disappointed with my results but I gave my best and all I had. It is amazing to be up here and on the podium with Team France again.

Kay de Wolf (Team The Netherlands) – Sixth | Seventh nation:
It was definitely a challenging weekend. I am definitely stronger in dry conditions compared to what we had today. I had some really bad starts; I felt like I was battling all day. It was just challenging. I am really happy that I did it though, because there is nothing quite like the Motocross of Nations.

Simon Laengenfelder (Team Germany) – Fifth | Eighth nation:
It was an okay weekend. I had some bad luck with my starts, so I had to fight a lot to get to the front. It was not easy! I had a good second race, for sure, as I took eleventh after getting caught up in a crash at the start. I came from quite far back. I am happy with my weekend! It was just cool to race here on my MC 250F.

Hunter Lawrence (Team Australia) – Second | Third nation:
It’s awesome—everyone rode awesome! We left it all out on the track, and no one gave up regardless of what happened. We’ve got some good years to come, and this is a great year to kick off the first time we’re on the team together. I’m looking forward to it; it’s going to be a good few years ahead of us. 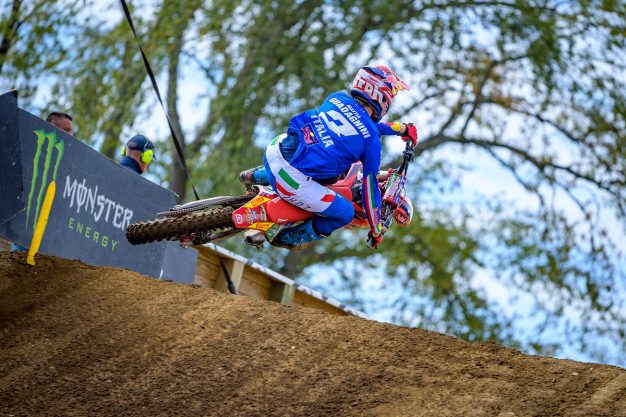 Mattia Guadagnini (Team Italy) – Sixth | Fourth nation:
The first race was unbelievable. I took the holeshot and led for half of the race before finishing third. I was so, so happy. I made a really big mistake in the final moto and crashed on the start. I crashed another time too, so it was not the best race. I was not riding that good either. I am really happy about my first race though.

Chase Sexton (Team USA) – Second | First nation:
Unbelievable! This whole weekend has really been a dream come true, with it being my birthday, and it all worked out. First one, first win—you can’t take that for granted, because they don’t come very often. I’m just so happy. That last race, it was key to get out there off the start. It was a nerve-wracking race, and I just wanted to get to the finish. I’m stoked on the day, stoked on the crowd. I’m at a loss for words right now.

Jett Lawrence (Team Australia) First | Third nation:
It was really good. That second one I felt not too bad—not the greatest start, and had a little trouble with my goggles near the end, which was a bit of a bummer as my pace would’ve been faster. I’m happy to be on the box for my first year and happy I got the overall win in Open. I can’t wait for next year; I feel like we [Team Australia] have a really good team, and you’ll be seeing a lot of us in the next few years. Hopefully we do better and better each year.

Dylan Ferrandis (Team France): Third | Second nation:
I gave everything today. I was not very lucky in moto one and then I threw away the win in moto two. I was a little bit disappointed with that, but I regrouped well and that helped us to second today. This was the best we could do. I would like to congratulate the home team, USA. They were very strong today and they had the crowd fully behind them, which just made me look forward to next year when we are on my home soil in France.