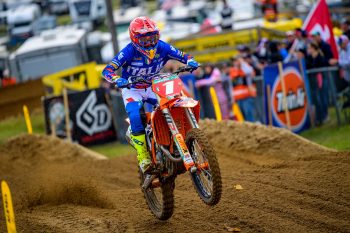 Emotions were high for motocross legend Tony Cairoli at the conclusion of RedBud as the KTM rider completed his final professional racing appearance, ultimately finishing P4 with Team Italy.

The nine-time world champion announced his retirement from MXGP last year before venturing to America and competing in five rounds of 2022 Lucas Oil Pro Motocross, notching a best result of fourth place at Thunder Valley.

Returning to the US to contest the final three rounds of 450MX in the build-up to the Monster Energy Motocross of Nations (MXoN), Cairoli’s stint was cut short by a hand injury sustained at Budds Creek which also limited his preparation ahead of Team Italy’s Chamberlain Trophy defense.

Cairoli qualified P9 in Saturday’s MXGP qualifying heat before working his way forwards on Sunday to score 7-9 results and land sixth in class, also one place off the MXoN podium alongside teammates Andrea Adamo (MX2) and Mattia Guadagnini (Open).

“The starts were important in these kinds of conditions and we did not get it in both motos; in the second race I slipped on the grill with the water and was almost last,” Cairoli recalled following Sunday’s motos.

“I had to come through the pack in both races. I was making decent passes and ninth was good. I’m pretty happy even though we didn’t really get into the mix. When I crossed the checkered flag in the last moto I was very emotional because I knew this would be my last pro motocross race. It was hard! I’m happy about the result as I know I haven’t raced since May. No mistakes, no crashes and riding just for fun. It was good.”

Cairoli spent the last 13 years of his career KTM mounted, taking the MXGP crown on six occasions for the Austrian manufacturer and also lifting the Chamberlain Trophy last year with Team Italy. The Italian prior had a six-year stint on Yamaha machinery, winning his maiden premier class title in 2009 after claiming the MX2 crown twice – 2005 and 2007.