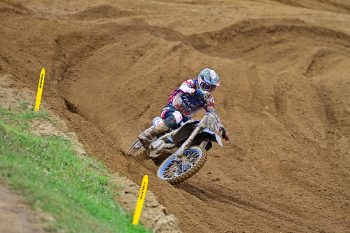 A ‘stupid crash’ in the final bout of the 2022 Monster Energy Motocross of Nations (MXoN) resulted in a ‘frustrated’ Dylan Ferrandis with the outcome at RedBud after rising to the occasion for Team France.

Ferrandis entered MXoN off the back of an injury-affected AMA season, pulling out of Monster Energy Supercross prematurely with a wrist injury and forced to miss the first eight rounds of his 450MX title defence with thumb ligament damage.

Last year’s American national champion was sidelined again before the Ironman national with lower back pain, which ultimately ruled him out of the remaining Lucas Oil Pro Motocross races, but emerged at MXoN and displayed his strongest form of the year to win Saturday’s Open qualifying heat.

The Frenchman finished sixth in race two (MX2/Open) after a fall at the first turn and on the final lap, later crashing out of the lead in race three (MXGP/Open), before ultimately crossing the line P4 to conclude the event third overall in Open and second with Team France alongside Maxime Renaux (MXGP) and Marvin Musquin (MX2).

“I gave everything for the team, for sure, but what a frustration for the second moto, getting the holeshot, leading the moto pretty easy and feeling so comfortable on the bike then threw away the moto win with a stupid crash,” he recalled post-race.

“Very, very frustrated, but I regrouped and gave it everything I had – I think we saved the second position and Team USA was very strong this year, we respect that. Next year will be in France and it will be something else, we will have the country behind us and we will be on home soil.

“It’s going to be different for them, but anyways, thanks to my teammates, the French federation and Monster Energy Yamaha Star Racing did such a great job, my bike was awesome.”

While his results had little effect in the overall outcome due to a consistent display from Team USA at home, it was a lost opportunity to conclude his year on a high for Ferrandis. Either way, it will serve as a boost leading into next season.

Motocross of Nations returns to France for the 2023 edition, with Team France victorious last time the event was held on home soil in 2015. Ferrandis was part of the winning team in 2014, then repeating at RedBud in 2018 as the MX2 rider on both occasions.