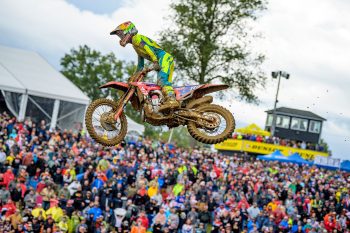 Winning a moto and the Open class at the 2022 Monster Energy Motocross of Nations (MXoN) officially marked Jett Lawrence’s anticipated 450 arrival, with the Australian swiftly adapting at RedBud just weeks after clinching a second 250MX crown.

Lawrence showed he was a force to be reckoned with on the 450 from the outset on Saturday, topping free practice and finishing third in the Open qualifying heat. Come Sunday, in race two (MX2/Open) he took the lead on lap seven and sprinted away to a remarkable 14.240s victory ahead of Chase Sexton (USA) and Mattia Guadagnini (Italy).

Vision issues affected the Australian in the final race (MXGP/Open), but he was able to salvage second in the moto after ditching his goggles to go 1-1 in class and cap off an impressive maiden outing. His efforts alongside Mitch Evans (MXGP) and Hunter Lawrence (MX2) allowed Australia to stand on the MXoN podium for the second time ever in third position.

“It was really good,” Lawrence recalled. “That second one, I felt not too bad – not the greatest start – and had a little trouble with my goggles near the end, which was a bit of a bummer as my pace would’ve been faster.

“I’m happy to be on the box for my first year and happy I got the overall win in Open. I can’t wait for next year… I feel like we have a really good team and you’ll be seeing a lot of us in the next few years. Hopefully, we do better and better each year!”

Lawrence will compete in 250SX – the region yet to be confirmed – once more with Team Honda HRC next season, before making the step up to 450MX full-time outdoors in the Lucas Oil Pro Motocross Championship.