Tixier, Pellegrini, Do and Camporese set to compete in 'pilot' season. 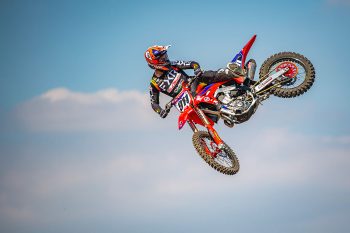 Honda Nils Racing has uncovered its four-rider line-up to contest the 2022 FIM World Supercross Championship (WSX), with former MX2 world champion Jordi Tixier to spearhead the outfit’s premier class assault alongside Angelo Pellegrini, while Thomas Do and Lorenzo Camporese will represent in SX2.

Tixier claimed the world title in 2014 and was also part of Team France’s winning Motocross of Nations (MXoN) team in 2018. The Frenchman competed in MXGP this season onboard a KTM, scoring a best overall result of P9 on two occasions.

Pellegrini has a European SX title to his credit, with international supercross experience in both 250 and 450 classes. Do brings Monster Energy Supercross experience dating back to 2016, scoring a top five in 250SX East at Salt Lake City 1 last year, as Camporese too has competed in the US and also lined-up in rounds of the 2018 Australian Supercross Championship in SX2.

“We’re excited about our team’s chances to compete in the WSX class and believe the experience, drive and determination of Jordi and Angelo can propel us to top 5 finishes and an opportunity to win a World Championship in the Future,” said Honda Nils Racing team manager Livia Lancelot.

“Our European contingency has performed well in motocross and supercross, and we look forward to showcasing their talents in the FIM World Supercross Championship on a global stage competing for a world title in front of thousands of die-hard supercross fans.”

The 2022 WSX Championship commences with the British GP at Principality Stadium in Cardiff, Wales on Saturday, 8 October, before moving to Australia for round two at Marvel Stadium, Melbourne, two weeks later.

This year will serve as a ‘pilot’ season, allowing the championship to establish itself and build momentum going into 2023. From 2023, and subsequent years, WSX will expand annually between June and November, with up to twelve events in 2023.