Tomac, Lawrence and Renaux win motos in 2022 Motocross of Nations. Team USA has clinched victory in the 2022 Monster Energy Motocross of Nations (MXoN) at RedBud, led by Eli Tomac alongside Chase Sexton and Justin Cooper to deliver on home soil ahead of France and Australia.

The all-star line-up dominated as a team in mixed conditions on Sunday after qualifying quickest a day earlier, while it was Tomac, Jett Lawrence and Maxime Renaux who split the moto wins.

Conditions began to improve in race one, featuring MXGP and MX2 riders on-track together, and there was no denying Tomac of a first-career MXoN moto win. Tomac executed the start that he needed and controlled things from there, withstanding constant pressure from MXGP qualifying heat winner Jago Geerts (Belgium) to eventually cross the finish with a 3.243s advantage.

Third came Maxime Renaux (France) ahead of Jeremy Seewer (Switzerland) in what was a Yamaha 1-2-3-4 result, while Australian Mitch Evans was consistent on his way to fifth after managing to keep Jorge Prado (Spain) at bay, who in turn was followed by Tony Cairoli (Italy).

Top of the MX2 entries was importantly Hunter Lawrence (Australia) in eighth position, directly ahead of class rival Justin Cooper (USA) in a solid performance of his own, while Kay de Wolf (The Netherlands) completed the top 10.

Other notable finishers included Liam Everts (Belgium) in P12, Glenn Coldenhoff 13th and Marvin Musquin (France) 14th, while misfortune struck both Valentin Guillod (Switzerland) and Max Anstie (Great Britain) with non-finishes. One moto in and it’s Team USA that leads on 10 points, ahead of Australia on 13 and Belgium on 14.

A spectacular ride from 450 debutant Jett Lawrence (Australia) saw him sprint away to a 14.240s victory in race two featuring the MX2/Open categories, but it was the second and fourth-place results of Team USA’s Chase Sexton and Cooper that put the home team in the box-seat.

It was Mattia Guadagnini (Italy) who stunned by leading almost half race distance, with Sexton unable to make a move stick in deteriorating conditions with rain falling once again. Lawrence made a move on Sexton during lap six and then quickly passed Guadagnini on the following lap to go ahead and win in convincing fashion, with Sexton eventually claiming P2.

Behind the leading trio came Cooper as top of the MX2 riders, fending off Ruben Fernandez (Spain), who in turn held off a charging Dylan Ferrandis (France) after he went down in the first turn and final lap. The top 10 for the moto included Calvin Vlaanderen (The Netherlands), Harri Kullas (Estonia), Musquin and Hunter Lawrence.

The race was a frustrating one for the elder Lawrence brother, going down on lap one and then again while navigating towards the top 10, but the end result could be of value in Australia’s podium hunt. With the MX2 class now complete, Cooper won the 250 overall from Lawrence and Musquin, while in terms of the Nations, it’s USA that leads on 16 ahead of Australia on 24 and France on 32 points.

It all came down to the final race between the Open and MXGP riders, where French talent Renaux won from Jett Lawrence by 4.600s, while Sexton’s third-place result was enough for Team USA to lift the Chamberlain Trophy for the first time in over a decade.

The opening lap saw Geerts go down and Tomac was caught up in the incident, before Evans also went down soon afterwards. Still, at the front despite Renaux and Lawrence charging in tricky track conditions, Sexton did what was needed to clinch the Nations victory alongside Tomac – eventually sixth in this final outing – and MX2 winner Cooper.

The moto saw Renaux, Lawrence and Sexton the top three, followed by Ferrandis after he fell while leading early on, and Seewer. Behind Tomac, seventh through 10th included Prado, Fernandez, Cairoli and Dylan Wright (Canada).

In the end, Team USA won on 16 points ahead of France on 23 and Australia on 26 – Evans’ final moto result of 28th the scratch. The class overall results saw Renaux edge Tomac in MXGP, joined on the podium by Seewer, as 450 newcomer Lawrence claimed P1 in the Opens over Sexton and Ferrandis. 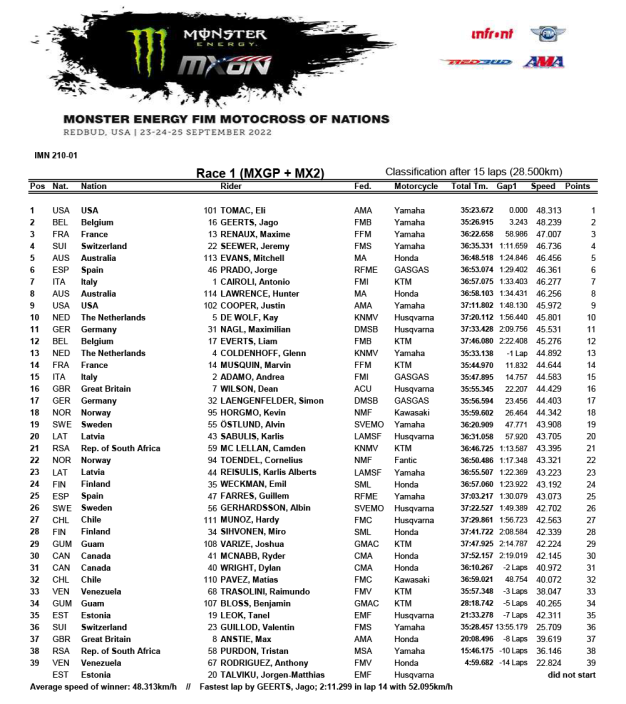 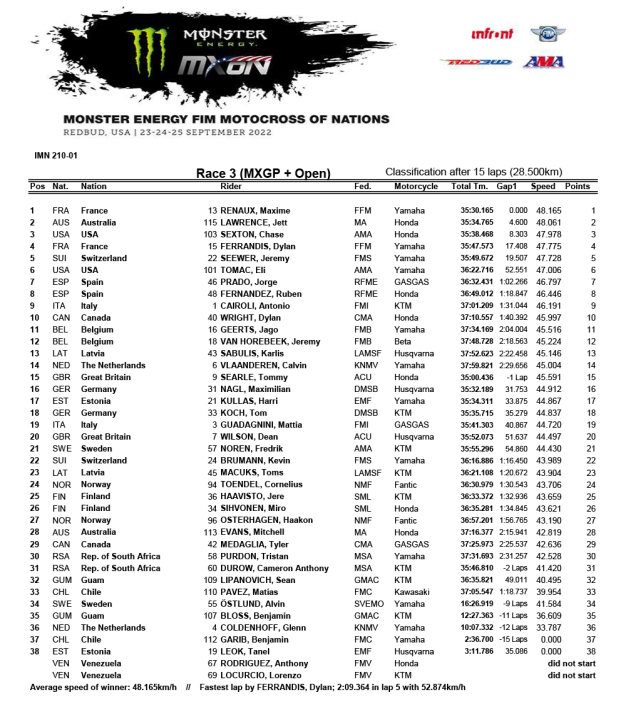 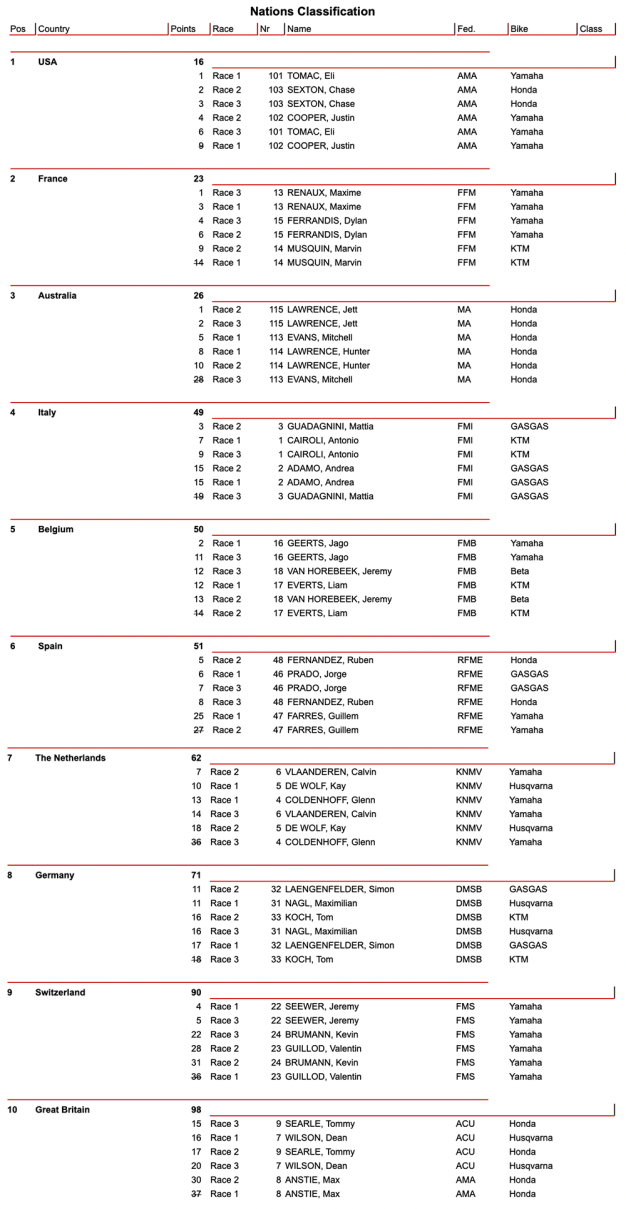