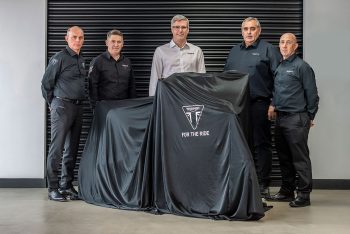 A factory MX2 World Championship program will be introduced by Triumph Racing in 2024, with plans in place to enter the MXGP category the following season.

The Triumph Racing team has been set-up in partnership with longtime Kawasaki Racing Team (KRT) MXGP leader Thierry Chizat-Suzzoni and will be managed by Vincent Bereni, who was also at KRT.

“Triumph have made a major commitment to build an MX bike and go racing in the FIM World Motocross Championship,” commented Chizat-Suzzoni. “I am happy that my team is going to be the official Triumph Racing team in MX2 and MXGP.

“Nick Bloor and the Triumph Board of directors have made their long-term ambitions for the project very clear and I see a huge amount of passion from everyone at the factory. I am happy with progress on the bike, it looks great, has speed on the track and Vincent and my staff are working with the engineers at Hinckley on building it into a competitive package.”

Triumph will enter a pair of 250cc four-strokes in MX2 from 2024, while development continues on its 450cc for the premier category over the course of the following year. The British brand is still yet to uncover its motocross models despite undergoing extensive on-track testing already.

“Our new partnership with Thierry demonstrates Triumph’s long-term commitment to competing at the highest levels of racing,” added Nick Bloor, Triumph CEO. “We share a passion for delivering world-class performance and the experience Thierry and his team bring will prove invaluable in our ambition to make our mark on a very competitive championship.

“Our entry into the FIM Motocross World Championship with a factory-supported Triumph Racing team signifies a landmark moment at the beginning of our new top-tier off-road racing campaign.”

Under the new Triumph Racing banner, which will now cover all of Triumph’s racing-related activities including Moto2 and Supersport racing, the partnership will encompass his well-established and highly successful team structure and facilities.

Triumph Racing is based at Triumph’s global headquarters in Hinckley, UK, where the brand’s research, design, engineering development and prototype build are located, while the Motocross World Championship team will be based at Chizat-Suzzoni’s race facility near Eindhoven in Holland.

“The launch of Triumph Racing is a pivotal step in our journey to bring Triumph to the pinnacle of racing across an even wider range of disciplines,” explained Jeremy Appleton, global racing manager of Triumph.

“Building on Triumph’s success as the sole engine supplier to the Moto2 World Championship and our participation in Supersport racing, the move into MX2 and MXGP opens the door on a strategically important new chapter in top-tier off-road racing. We well know the demands of world championship competition and that is the reason for forming the partnership with Thierry.

“Together with Vincent, their approach to racing and development of performance is impressive and we are looking forward to building the project together and adding to the success that they have already achieved in the Motocross World Championship.”

While testing continues to take place in the United States, there has been no detail or timeline on Triumph Racing’s plans to enter Lucas Oil Pro Motocross Championship.