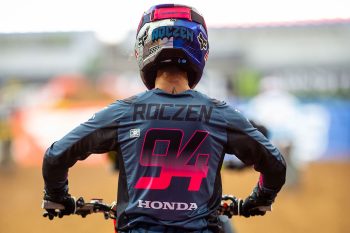 The FIM World Supercross Championship (WSX) plans of Ken Roczen have been confirmed with Honda Genuine Honda Racing after emerging in a shakedown test at the Millsaps Training Facility (MTF), just days after revealing he was unable to agree to terms with Team Honda HRC for 2023.

Roczen has maintained a commitment to WSX despite his participation in the SX Global led-series effectively derailing an opportunity to continue with American Honda in Monster Energy Supercross next season.

It’s long been expected that the 28-year-old would land at Yarrive Konsky’s Honda Genuine Honda Racing team in WSX, that deal leveraged by the series organizers in a bid to get US-based Roczen onto the world stage. Konsky also operates Fire Power Honda Racing in the US, as well as the factory Honda team in his home country of Australia.

Roczen will be equipped with a CRF450R in the WSX category alongside Dean Wilson, who is still yet to be formally announced, while Max Anstie and Wilson Todd will be the team’s SX2 entries. Wilson, Anstie and Todd will all ride American Supercross with the team next season.

The opening round of the 2022 WSX Championship takes place at Principality Stadium in Cardiff on 8 October, before the series will move to Marvel Stadium in Melbourne, Australia, for round two between 21-22 October.