Line-ups continue to take shape ahead of inaugural season. 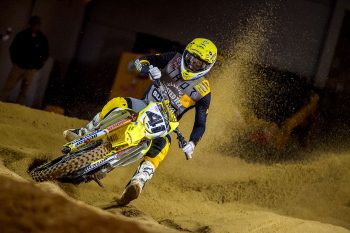 Three riders have been confirmed for Pipes Motorsports Group’s (PMG) FIM World Supercross Championship (WSX) charge, with Brandon Hartranft to campaign in the premier class while Marshal Weltin and Dilan Schwartz will line up in SX2.

Hartranft brings experience from racing in the AMA, completing 450SX this season inside the top eight with Twisted Tea HEP Motorsports Suzuki, Dustin Pipes the co-owner of that team.

Stepping back on a 250 is Weltin, who scored a best result of P11 in 2022 250SX East and 10th in 450MX. Like his newly announced WSX teammates, Schwartz also has a share of US racing under his belt, achieving top 10s in both professional supercross and motocross on a 250F.

“With our team officially set for the FIM World Supercross Championship’s pilot season, we’re excited to see how we stack up against the other teams and some of the best riders in the world. We believe we have a great chance to win a World Championship,” said PMG owner Pipes.

“The WSX has done an amazing job putting this pilot season together and allowing the teams and riders to showcase their skills and talent on a global stage. The first Grand Prix is right around the corner and we’re ready to compete and podium in both the 250cc and 450cc classes with our talented riders.”

Anthony Rodriquez was initially revealed as the fourth rider for the team, however, it has since been confirmed that he will not compete with the outfit in WSX. An announcement is expected in due course on who will represent on a 450 alongside Hartranft.

Update: Fredrik Noren will compete for PMG in 2022 WSX and form the squad’s premier class line-up alongside Hartranft.