Steps made at Fox Raceway for promising Star Racing talent. 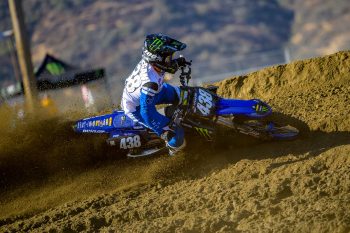 Claiming a top 10 result in the final moto of the year marked a convincing end to Haiden Deegan’s second 250MX national, setting him up for a full-time debut in 2023.

At only 16, Deegan has been thoroughly impressive in the professional ranks at Ironman and Fox Raceway, able to meet his goal of riding to 10th in moto two on Saturday.

The Monster Energy Yamaha Star Racing rider qualified a stronger P8 in Pala, however, was plagued in moto one with a poor start that left him 21st after the opening lap. Working his way forward throughout the race, Deegan crossed the line 16th.

A better start in the second bout saw Deegan P13 in the early stages before delivering a solid race to finish 10th – his strongest result out of the four 250MX motos he has competed to date, which landed him 13th overall on the day.

“It was a good day,” explained Deegan. “We know we need to work on starts since they weren’t the greatest. I know I only did two rounds, but I’m glad I was able to end it with a top 10 since that was one of my goals.

“Overall, I’m really happy with the day. It was a good experience, and hopefully, next year for Pro Motocross we can come out swinging.”

The Monster Energy Yamaha Star Racing rider isn’t expected to enter Monster Energy Supercross next year, but is tipped to turn pro at the opening outdoor round.