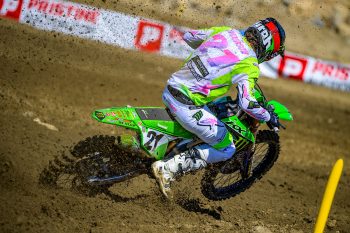 Third overall at Fox Raceway capped off a strong Lucas Oil Pro Motocross campaign for Jason Anderson, who completed the 2022 450MX season a convincing P3 in the standings.

Entering the 12th round in Pala, Anderson had all but sealed a top three position in the championship. He qualified second for the motos and clawed his way forward from a tough first lap in the opening race to finish fourth, before concluding the series with third place in the final bout.

“I was running inside the top-10 at the start of moto one but, unfortunately, the rider in front of me tipped over and I was unable to get around him which dropped me back to around 16th,” said Anderson.

“I still managed to work my way up to fourth before the end of the race but used a lot of energy. Moto two started much better. I was running in second after the first turn and took over the lead on the third lap.

“I thought I had the speed to hold off the guys charging behind me, but they were on another level today and I finished the race third. Overall, the team put in a great effort today and I’m happy we were able to bring home another podium result.

“This has been one of the most fun seasons of my career and I can’t thank the guys at Monster Energy Kawasaki enough for all their hard work. I’m looking forward to more good times and race wins next season with the team.”

Earlier this year he finished second in the 450SX standings with seven main event victories to his credit.