German limited to P9 in Pala to complete 2022 outdoor campaign. 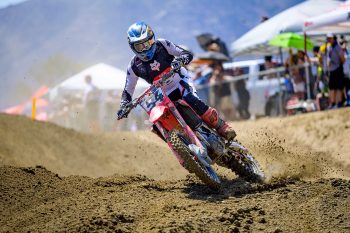 Roczen started this year’s 450MX campaign in fine form, second overall at the opening round before notching the overall victory at Thunder Valley.

The German, however, suffered physically at points throughout the season but did enter the 12th round with an outside chance of landing third in the 450MX standings.

As a result of the opening lap falls, Roczen was out of the top 20 in the early stages of each race in Pala, which limited his scorecard to 8-13 as he charged his way through the field in both outings.

“This weekend, everything was very unique; the weather was obviously super-hot, and I had really bad luck,” explained Roczen. “I went down in the first turn in both motos.

“The second one took me a while and really knocked the wind out of my sails; I’m kind of banged and bruised up everywhere. I was really far behind the whole field, so I just rode the best I could; I didn’t want to miss the second moto like in the last round last year.

“I’m kind of glad this one’s over. I’ll regroup, reset and try and charge forward in the off-season.

Roczen capped off 2022 450MX fourth in the standings. He will not compete in the Motocross of Nations (MXoN) at RedBud later this month and has committed to the FIM World Supercross Championship (WSX), commencing in October this year.