A perfect 1-1 scorecard secured Monster Energy Yamaha Star Racing’s Eli Tomac his fourth 450MX title at Fox Raceway’s finals, as Team Honda HRC’s Jett Lawrence notched the overall at round 12 of 2022 Lucas Oil Pro Motocross and claimed back-to-back 250MX championships. MotoOnline caught up with both riders after the races for this Debrief feature. Eli Tomac, 2022, 450MX champion again. Congratulations, what are the feelings like right now?

I just think of the year as a whole, this was a season of my dreams. I envisioned this, but the likelihood of it happening a lot of times is not likely, right? It was a great battle with Chase [Sexton] the whole season, going all the way to this last round, being one point, like you had to go do it today. That was what was cool about today, there was no rolling around, you had to be the guy, you had to go and win. We were able to do that, it’s so cool for the whole team.

I know there was a little bit of talk about this place and Fox Raceway being a strong one for Chase. You seemed quietly confident the whole time, knowing what you had to do to execute, that sort of thing. There must have been so much focus going into today and I think experience counted as well when it came to the pressure?

It did, for sure that helped, having a couple of these in my bag, but going into today, I knew round one [at Fox Raceway] didn’t mean much. I’ve had great success here before, but for the first race this year I was behind the ball. My knee was squirly, I didn’t get a lot of testing in and we changed the bike quite a bit too after round one. I knew I would be fine.

Where does this 450MX title rate? I know you said you are looking at this season as a whole, it’s obviously very, very special. This outdoor title in particular, where does that rank for you in your career?

Probably the top, because there was no room for error, like zero. It would be interesting to see the overall points, I’m pretty sure this would be my highest scoring season, and for the points to be that close was like sketchy for me. It ranked really high, and to do it in year one with the team was cool.

Coming up next, Team USA, RedBud the MXoN, that’s a super important event for yourself and the country. This is a great way to go into that, and you’ll be alongside Chase and Justin Cooper. Really important one.

Yeah, it is. We have a strong team, we’ve gotten our rear ends kicked quite a few years in a row so hopefully we put up a good fight. I mean we should have the advantage, but we said that last time and it meant nothing. So try to stay level-headed, I think we are all pretty solid, we’ve got a strong team.

Yeah, it’s hard to even believe that is what happened, and it ended up being this successful. Super rad. 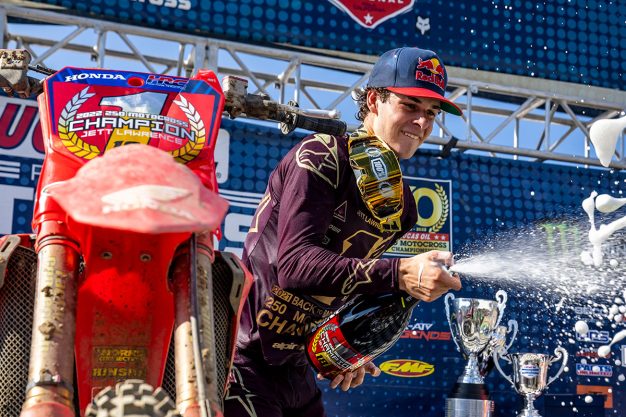 Thank you, it was an awesome year this year, definitely a lot smoother than last year’s outdoor championship. Super pumped, I was way more consistent, I got a lot more wins, nine out of 12 so super pumped.

You obviously had the advantage coming into today, but what were the nerves like? Final round, hot conditions, track was tough, tell us about the day.

The nerves were actually pretty okay, having that points lead if I were to have lost the championship I would have had to really mess it up. We were just having fun with it, last outdoor race on the 250, so we were just enjoying it.

It looked like after the first moto, if you knew it was Hunter behind you, you wanted to let him through. Bit of disappointment there, but at the same time on your behalf, a lot of relief?

I was pissed, because I thought it was Jo (Shimoda) the whole time and looking back I saw Hunter and I was like ‘damn it’. So I’m bummed about that, really wish I could have helped him get some extra points. I was more pissed off than being happy about winning the championship. It was mixed emotions.

How did this outdoor title compare to last year? Such a different way of clinching it, and this year you had nine overall wins and so many moto wins. How do the two compare?

One was way better and smoother, and the other one was a little bit more exciting, taking it down to the very last race. This one was good, did almost everything that I wanted to do and it was a good season.

So it’s confirmed, stepping up to the 450 outdoors next year?

Yeah 450 outdoors next year, which should be a lot of fun, got a lot to learn with those boys. Those boys are fast, so it’s going to be exciting.

Team Australia, you are on the big bike there as well. Pretty special occasion being alongside Hunter and Mitch Evans. Must be a really good feeling at this point?

It’s going to be really exciting, my first nations and hopefully, I can do Australia proud.