Both riders speak out on that first race incident at Fox Raceway. 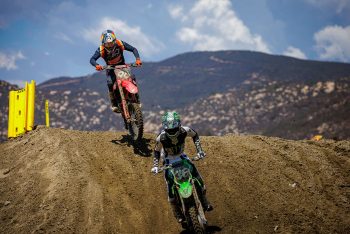 The clash between Hunter Lawrence and Jo Shimoda in 250MX moto one at Fox Raceway was one of the major talking points post-race on Saturday, with Shimoda ultimately claiming the elusive runner-up result in the final point-standings.

Lawrence attempted an aggressive move for second position in the closing stages of the opening bout in the Lucas Oil Pro Motocross finals, later confessing he intended to make contact in a bid to stamp his authority, but not purposely to that extent after over-committing.

“It was not the greatest start, Jett and Jo were one and two,” Lawrence explained to MotoOnline. “I was like ‘I need to head down, bum up’ and I was slowly catching, catching.

“There were two laps to go, with the shorter motos I was like ‘I’ve got to do something, I’ve got to go for something’, and there was that hill and I was like ‘alright I’ve got to send it’, and hopefully I could bluff him or he would check up.

“I was like ‘I’m going in with intentions to hit’ because I needed the points. Yeah, we hit, I got kicked halfway down and barely touched the brakes because I got kicked.

“We hit pretty hard, he was pissed, which absolutely, we hit pretty hard and my hand came up and I would be pissed as well. At the same time, my back was up against the wall. I’ll own it.”

While Lawrence was able to power away to P2 in the moto — to the dismay of moto winner and brother Jett, who would have let Hunter by if he was aware of the track position — while Shimoda battled shoulder pain to salvage fourth.

“I thought he [Hunter Lawrence] was going to say something after the podium, which I was a little surprised, no eye contact or nothing,” Shimoda explained to PulpMX. “But again, it’s racing, I feel like I don’t owe him one.

“It’s weird, you can kind of see from the top of the hill where to stop, you know there is going to be a lot of bumps, we are professional enough to know where to stop.

“If he would have made the turn, it’s a clean pass, but he jumped off the rut so I’m not sure what he wanted to do, whether he wanted to crash together.

“I went over the bars and hurt my shoulder a little bit, but yeah just disappointed how that pass was.”

The afternoon saw Shimoda rebound with a dominant performance in going on to win the final race of the year, sealing second overall and in the final championship standings. Lawrence, meanwhile, was affected by his starts yet again and had to settle for third in the championship, won once more by Jett Lawrence.

Both Hunter Lawrence and Shimoda will line up as title favorites in 250MX next season, as Jett Lawrence will make the move to the premier class with Team Honda HRC. All three are managed by high-profile agent Lucas Mirtl.