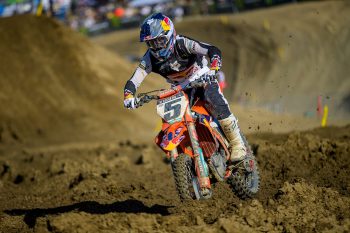 A single season back in Lucas Oil Pro Motocross is all Ryan Dungey needed to scratch his comeback itch, confirming on Saturday evening at Fox Raceway that he will promptly slip back into retirement from the sport.

Multiple-time 450MX champion Dungey made a shock decision to race again in 2022 after landing a deal with Red Bull KTM, five years since his initial retirement in 2017 and went on to prove himself among the best in the business.

Despite being unable to claim an elusive podium, Dungey narrowly missed a top-five finish in the championship behind Christian Craig (Monster Energy Yamaha Star Racing) following 12 rounds, but regardless, he’s calling time on his career once again.

“It was really a last-minute decision and opportunity, but I wanted the challenge and I knew I was in for a tough one,” Dungey explained to MotoOnline. “I think as we got through the season, things got better and better, the set-up got better, but never bridged the gap to the podium.

“I’m happy with where I ended up, I pushed and gave it my all and can’t be too mad, I was away from outdoors for five-six years. If I was going to take a little off-season, and do it again next year – which I’m not, this is my last race – I would feel much more confident that I could build and get to another level.”

The best points haul of Dungey came at Budds Creek with 4-4 results, earning sixth in the final standings after a difficult day at Pala saw him record 10-5 finishes for eighth overall on the weekend to cap-off his career.