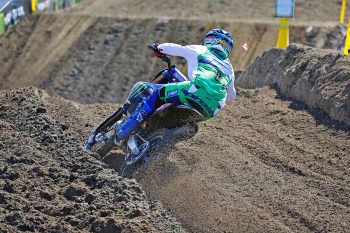 Red plate-holder Eli Tomac struck first at Fox Raceway this morning, qualifying on top of the 450MX leaderboard, as Jett Lawrence led the way with a late fast lap in the final 250MX session.

With the Lucas Oil Pro Motocross Championship on the line at today’s 12th and final round, Monster Energy Yamaha Star Racing rider Tomac signalled his intentions by setting a late 2m24.345s lap-time.

Behind Tomac was Jason Anderson (Monster Energy Kawasaki), 0.373s in arrears, but near half a second clear of title challenger Chase Sexton (Team Honda HRC), who was in P1 prior to both Tomac and Anderson stepping it up in the closing moments. 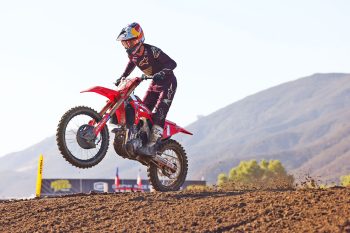 The benchmark for 250MX qualifying was set by defending champion Jett Lawrence (Team Honda HRC) at 2m26.061s on his final lap of session two, dislodging Justin Cooper (Monster Energy Yamaha Star Racing) by half a second in the process.

With one hand on a second-straight crown, it was another important step for the teenager on championship day and behind both Lawrence and Cooper, RJ Hampshire (Rockstar Energy Husqvarna) was third on the charts.