Direct updates from the final round of the season in California.

Follow the 2022 Lucas Oil Pro Motocross Championship with direct updates from round 12 of the season at Fox Raceway through Racefeed. 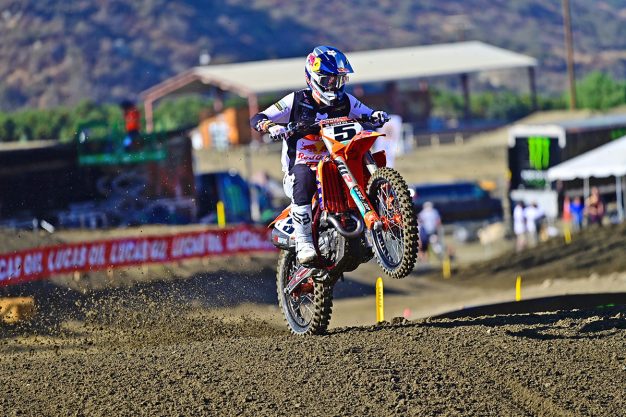 450MX qualifying:
Red plate-holder Eli Tomac struck first at Fox Raceway this morning, qualifying on top of the 450MX leaderboard, as Jett Lawrence led the way with a late fast lap in the final 250MX session this morning. With the championship on the line at today’s 12th and final round, Monster Energy Yamaha Star Racing rider Tomac signalled his intentions by setting a late 2m24.345s lap-time. Behind Tomac was Jason Anderson (Monster Energy Kawasaki), 0.373s in arrears, but near half a second clear of title challenger Chase Sexton (Team Honda HRC), who was in P1 prior to both Tomac and Anderson stepping it up in the closing moments. Next in line were former champions Ryan Dungey (Red Bull KTM) and Ken Roczen (Team Honda HRC), while Aaron Plessinger (Red Bull KTM) was marginally ahead of Christian Craig (Monster Energy Yamaha Star Racing) in the battle for sixth position. BBMX KTM rider Benny Bloss was seventh on the time-sheets, followed by Garrett Marchbanks (Muc-Off FXR ClubMX Yamaha) and Justin Barcia (TLD Red Bull GasGas), while in his last outdoor appearance, Dean Wilson (Rockstar Energy Husqvarna) slotted into 11th position.

250MX moto one:
The opening moto saw Jett Lawrence holeshot and go on to win both the moto and clinch the crown with a race to spare. Lawrence came under attack from Shimoda in the mid-stages, while in turn Hunter Lawrence began to make a charge from as far back as P5 on the opening lap. Shimoda attempted a move on Jett, which was to no avail, which in turn enabled Hunter to close in and set up a move of his own. After trying his hand at getting by Shimoda for a number of laps, with two to go Lawrence committed and made contact, which put Shimoda on the ground – able to remount in third position as Hunter charged on. In the end, Jett edged Hunter to the line despite the latter needing all points possible to overcome Shimoda in the points, while Cooper also took advantage of Shimoda’s misfortune to steal the final place on the podium. Fifth was solid from Musquin in his return to the class, as Hammaker, Cameron McAdoo (Monster Energy Pro Circuit Kawasaki), Pierce Brown (TLD Red Bull GasGas) and Carson Mumford (Bar X Suzuki) were the top 10.

450MX moto one:
Multiple 450MX champion Tomac took an instrumental moto win to begin the most important day of all, setting him up as points-leader with a four-point margin entering the afternoon’s final 25-minute plus two-lap moto of the round. After giving chase from the outset while Sexton led the early stages, Tomac finally made his move – after Sexton was baulked by a lapped rider right beforehand – with just under five minutes remaining and made it count. From there, Tomac held strong to win by 1.540s in his most decisive result of the year so far. Sexton will need luck on his side come moto two, however, was still convincing in P2, as Craig impressed with third place, albeit a full 1m15s in arrears at race’s end. Anderson fought forward from 16th at the end of lap one to fourth, with Barcia dropping from third early on to fifth. Positions six through 10 belonged to Bloss, Plessinger, Roczen, Freddie Noren (BBMX KTM) and Dungey, despite going down in the first turn and clawing his way back into the top 10.

250MX moto two:
The final 250 class moto of the season saw Cooper jump out front initially, until Shimoda quickly made his way by and powered away to the moto win by 24.350s, securing runner-up in the series as a result. Behind him, after clinching the title earlier, Jett Lawrence rode to P2 and the overall, followed directly by Cooper. Fourth was Hampshire ahead of Hunter Lawrence, who had to claw his way back through the field from outside the top 10, while Vohland, Hammaker, Thrasher, Musquin and newcomer Deegan were in sixth through 10th places. In the end, there was no denying Lawrence the round and championship victories, joined on the podium today by Shimoda and Cooper. The final point-standings saw Lawrence successfully defend from Shimoda by 45 points, with Hunter Lawrence third and a further 12 behind in the series.

450MX moto two:
Action started early in the final 450 class moto of the year when Sexton went down not once, but twice in the early laps and then he would later go down yet again. Up front, it was Craig who led laps initially until Anderson took charge, before Tomac took his turn at the front eight laps in. Meanwhile, Sexton would keep pushing and made it into second position with two laps to go, but it was Tomac who went 1-1 in a dream result to seal the championship. Sexton crossed the line second ahead of Anderson in P3, while Craig was fourth and Dungey turned his day around somewhat in P5. Sixth was Barcia, with the top 10 being Plessinger, Bloss, Dean Wilson (Rockstar Energy Husqvarna) in his last outdoor appearance and Shane McElrath (Muc-Off FXR ClubMX Yamaha). After going down in the first corner, Roczen recovered to finish in 13th position. Overall for the round, Tomac was perfect to win ahead of Sexton, with Anderson completing the podium. Tomac’s final advantage in the points was seven following 24 motos ahead of Sexton in what was his best showing yet, as it was again Anderson who scored P3 upon the series completion.