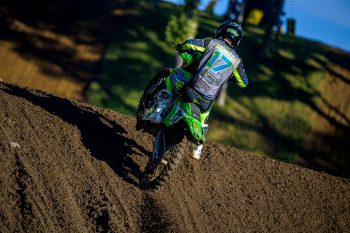 Alongside Jason Anderson through the outdoors, Savatgy displayed flashes of brilliance back aboard a factory KX450, but aggravated an old injury at Ironman last weekend.

Also currently fighting sickness, Savatgy confirmed this morning that he won’t be lining up at round 12 while also still recovering from a badly bruised foot.

“Just wanted to thank Kawasaki for the amazing opportunity this summer,” Savatgy commented. “I got sick this week and am still dealing with a sore foot, so we have decided to sit out the last round. Coming into this I wasn’t sure what to expect, but the boys made me feel like I wasn’t just a fill-in guy, I was on the team.”

Savatgy sat ninth in points prior to missing the motos at last weekend’s penultimate round, his best moto result of the season being a third in the opening encounter at RedBud. It’s unclear what his future will hold following a convincing effort outdoors.

“My future for 2023 is unknown, but if I learned anything this summer it’s that I know I can still be a bad ass on a dirt bike. Sometimes it’s easy to get lost, but this opportunity has only fueled the fire. Again thank you guys, everyone at Kawasaki. I had a blast, until next time.”