Team Honda HRC’s Chase Sexton scored a crucial victory in the second 450MX moto at Ironman to secure the overall and set up a nail-biting conclusion to the 2022 Lucas Oil Pro Motocross Championship, as Jett Lawrence (Team Honda HRC) took another step towards claiming back-to-back 250MX titles with the win at round 11. Both riders were available to the media after the races for this Debrief feature.

Tell us about your day.

Qualifying was good for me today finally, I’ve been off a little bit in practice, just rushing stuff. I felt like I had good pace today, I felt solid on the bike which was good. First moto, horrible start, got pinched and just tried to make my way through the first corner safely and not crash. Had a lot of work cut out for me, Eli [Tomac] was not that far in front of me, maybe three positions or so, but he seemed to get through faster than I did. I was kind of either make or break and I got through, finally. Spent a lot of energy getting to the front and then I got to Eli, and it was another battle. I got around him in the corner after the finish line and he ended up getting back around me there. It was just another battle, first moto. I feel like in the second moto when I got that holeshot, I was able to ride, not conservative, but I was able to conserve energy a little bit. I knew when I got to the lappers Eli was going to kind of suck me up and I needed to have energy for the end, that was kind of my game plan. I wasn’t expecting him to make a mistake, obviously, which gave me a bigger gap. I felt like I had enough in me towards the end to make a push. It was a tough track today, I think one of the rougher tracks we’ve had this season as far as braking bumps. I know Randy Poulter the guy who does the track, and he doesn’t like to touch it when it gets rough. Gnarly track, good ruts and overall was a good racetrack.

You guys both coming through the pack, then all of a sudden you are catching him [Tomac]. Once you pass him, I’m like, ‘alright, crazy ride’, but then Eli turned it up another couple of notches. How was that?

I mean, when I passed him, I knew it wasn’t the last time I was going to be seeing him. I didn’t take a breather when I got there, but I maybe let my guard down a little bit too much and he obviously took advantage of that. Then once he passed me, he ran away, and I was like ‘oh he is gone’. So the last lap, I ran a little bit better, I made a few mistakes as soon as he got around me, so that wasn’t good and I was a little bit frustrated with that, but overall, my first one I felt I was riding good and I felt like I had some good lines and probably should have been a little bit more focused when I got to the lead. That was my fault, but I was able to get out front second moto and kind of conserve a little bit of energy.

It’s a crazy close championship battle between you guys, and you guys are on the limit, it’s all or nothing, now or never. Is it wearing on a little bit? It’s a long season, you had all of the supercross and this whole time you’ve been so close.

It’s been cool because I haven’t been in this position on a big bike yet. This is kind of what I work for, so I can’t say it is a pain because I’d rather be in this spot than third in points and not even close. It doesn’t seem like either of us can get away from each other, especially after Budds Creek, just crazy flip-flop. This weekend, I knew it was going to be another showdown, so it’s definitely something different and this is the first time I’ve been in contention in outdoors ever, 250, 450 it doesn’t really matter, it’s gnarly and I think you have to take each moto, every moto pays points unlike supercross where it is one main event, so you have to be consistent. I think this year for me just being comfortable on the bike and having more fun during the week where I am riding, kind of having my own little program is starting to really kick into gear and I am starting to reap those benefits. For me, I want to be in this spot, that’s kind of how I am looking at it right now.

I’ve had success at Pala, it’s not like it is my favourite track, but for some reason, I seem to have good speed there. I didn’t race there in the second race last year, and I think Eli one so it’s so hard between us to take the tracks, and say who has an advantage. It’s just going to be another battle, that’s all that I can expect at this point. I’m definitely not getting ahead of myself, like I said, I go fast there, but I’m going to have to focus and give my all to the end, I think it is going to be another battle. You can’t get ahead of yourself, and I am going to keep doing the same thing that I have been doing the week and try and rest up and recover for next weekend, and just put it all on the line again.

Obviously, you want to win this title, but say you come up short, is the experience you get this year battling with Eli going to help you move forward?

Yeah, I could say that, but for me, you don’t know how many chances you will get at this stage. I’ve just got to stay in the moment and try and capitalise on what I think I can do. My goal is to win, obviously, that’s Eli’s goal too, so it’s going to be fun. But I think for me, racing him this summer has elevated my riding to somewhere I have never been before. So that’s something cool, I think it is helping for me next year, like you said, but I’m locked in on one thing right now and that is to win. That’s my goal. 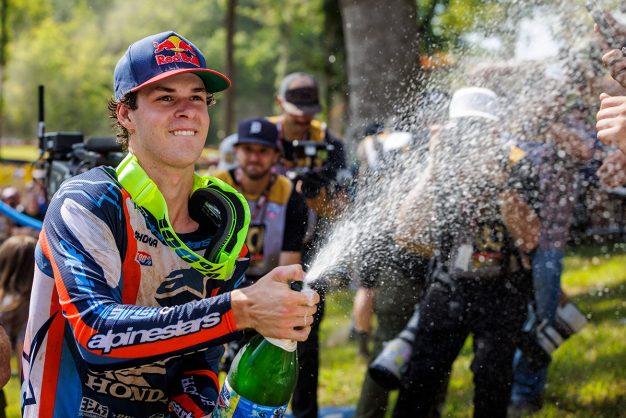 Jett, how was your day?

It was I feel like a pretty mellow day. Just trying to click in some laps, get good times in qualifying and ended up going P2. I was surprised, I thought the second qualifier was going to be faster, but it wasn’t as much faster. First moto, it was a decent start but was able to make my way to the front, had a good flow there. Then the second one, I had a really good jump but then I got to bit the deeper, ripped stuff and the boys ended up going past me. I don’t know if I might have missed a shift or something, we’re going to look at the data for that. The first few laps, I kind of struggled to get a flow. I actually went back a few positions, so it was not ideal. But we were able to make our way through and I got third, the boys were too far gone, so I just kind of settled in for there.

From last year, I can kind of say it was definitely a lot rougher than last year. I feel like it was a little dry to start off with, and I feel like definitely today it was a lot gnarlier than the Ironman’s I’ve previously raced at. In the first moto the ruts still had some good moisture in it, and they all had hooks in it, so it was very pain in the butt. Then the second moto, it was funny, a few spots actually blew out and went to kind of crumbly, dry dirt so it was definitely different. Had some definitely harder, slick spots in a few spots. It was tricky, but it was good.

Looks like you’ve got a 41-point lead. Next week, good first moto finish you could wrap it up potentially a moto early. It doesn’t look like you’ve been on damage control or anything, or cruising this thing in, even though you’ve had a big lead. Talk about your mindset going into next weekend, knowing one good moto could do it for you.

Yeah, we’ll see how it goes, just see what it brings me. Hopefully we can keep the ‘no losses out of overall wins’ going at Fox Raceway. So, we’ll see how it goes.  Yeah we’re just going to go in like each weekend, come in with a fresh mind, don’t really think much about points and just do the best I can do and then see where we end up.

You’ve always been really good there [Fox Raceway]. Is there something about it you like or something maybe you can take back to how you grew up that makes you good there? Or is just one of those things, you just ride good there?

I don’t know, I might be just getting very lucky, and my luck could be over this weekend. We have to wait and see, I could just have a very good flow there or something, but we’ll have to wait and see. If it’s luck, we will see if the luck keeps going, could end next weekend [laughs].

On the track, we know we are there to do our job so we race was hard as we need to, we’re fairly clean, we respect each other enough. We’ll get close to each other or take a line, but we’re never going to really purposely take each other out. Then off the track, we both know, whatever happens on the track, happens on the track, depends how bad it goes. Off the track, we just talk smack the whole time. We get along pretty good, the first time I think we met was back in 2014, when he didn’t know any English at all, it was 2014 on 65s in Belgium. He didn’t know any English and I was just as talkative then. I was just talking to him, and he would just nod or shake his head. It was funny. When we came here in 2018 and I was going to be teammates with him, from there it kind of set it off being pretty good friends. It was very competitive being teammates on GEICO.  From there we’ve been good friends, we race each other always fairly similar speed that we kind of just got used to having that battle on the track, and then off the track we might rub it in a little bit. But most of the time, we just talk smack.

What about brothers battling for a championship? The High Point race between you guys was probably one of the best races I’ve ever seen. That second moto, that was like full on the edge, there was no more that you guys push. But you were clean, and it ended up so close. Talk about the brother part of it.

You guys practice together during the week and then race together on the weekends. You’re with each other all the time. Who’s faster in practice at home?

It’s definitely fun to watch when we’re both feeling good, because we know where each other are on the track, and we have our lap times on the same pit board. So, when one person goes faster and we see that, and then the other guy steps it up. So, throughout the moto, our lap times just keep going, inching down and down.