Lawrence takes one step closer to 250MX title at Ironman

Championship going down to the final round next weekend. 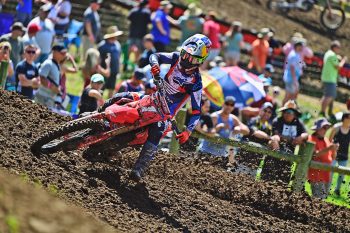 Moto one of the 250MX category saw Nate Thrasher (Monster Energy Star Racing Yamaha) jump out front early and he led for a full seven laps, only for Jett Lawrence to climb forward from P5 in the early stages and take control when it counted.

In the end, Team Honda HRC rider Lawrence’s winning margin was 6.911s over the resurgent RJ Hampshire (Rockstar Energy Husqvarna), who in turn was a further 4.8s clear of Hunter Lawrence (Team Honda HRC) in his return to the podium.

In terms of the points, Lawrence needs to extend his lead by 13 points over Shimoda today to clinch the title and he took another step towards that in the first moto, increasing his advantage by nine points already.

Unfortunately for high-profile debutant Haiden Deegan (Monster Energy Star Racing Yamaha), he fell out of contention in the closing laps while circulating in P11.

Victory from Shimoda in the second moto of the afternoon denied Lawrence the chance to clinch the title with a round to spare, but 1-3 results were still enough from him to seal the overall.

It was Cooper who took the holeshot this time out, only for Shimoda to soon hit the front and that’s where he would remain in going on to win by 6.553 s ahead of Hunter Lawrence, with Jett Lawrence third.

The overall podium was Lawrence, Shimoda and Hunter Lawrence, while in the standings it’s Jett who leads by 41 points ahead of Shimoda, with Hunter a further seven in arrears with one round remaining.

The final round of the Lucas Oil Pro Motocross Championship will be held at Fox Raceway, Pala next Saturday. 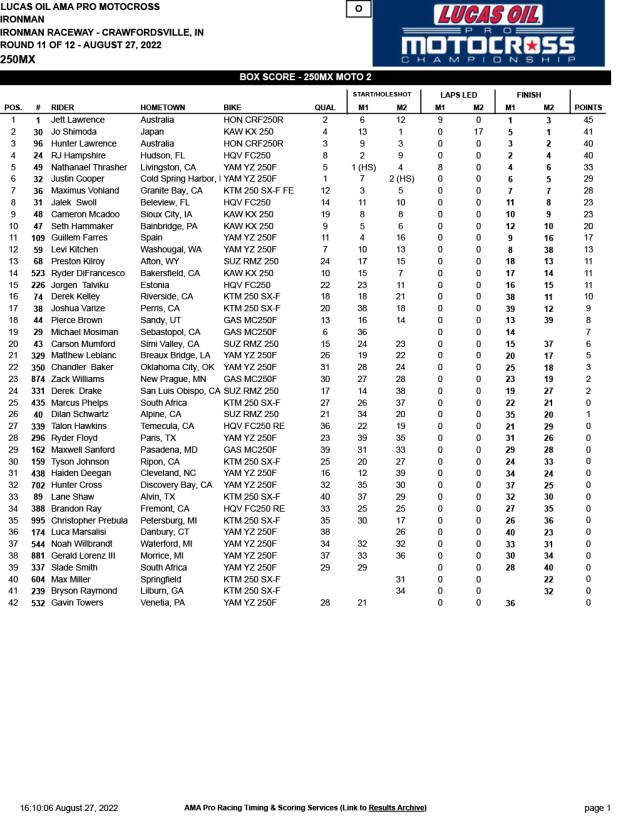