Recalling the United States' 2019 outing at Assen in torrential conditions.

With the 2022 Motocross of Nations (MXoN) fast approaching, Team USA has confirmed a formidable line-up as it returns to the event following a pandemic-enforced absence. In this edition of Rewind, we take a look back at the country’s most recent MXoN appearance in 2019 at Assen, ahead of its comeback at RedBud on 24-25 September. It was a rain-soaked day in the Netherlands, which made the sand-based circuit even more challenging to the extent that Osborne labelled the conditions close to the toughest he’s ever ridden in.

After qualifying third, race one (MXGP/MX2) was a tough outing for Team USA with Cooper falling and colliding with Anderson. The pair remounted and finished the outing 25th and 17th respectively.

Race two (MX2/Open) saw Osborne place fifth, having worked his way forward seventh on lap one as Cooper finished 29th while pushing through the pain of a hand injury sustained in the opening moto fall to conclude MXoN at Assen 15th overall in MX2.

In the final moto (MXGP/Open), Osborne completed the opening lap in 15th, before dropping to P20 following a stop to change goggles. He quickly made his way back inside the top 15 before concluding bout P13. He ended the event fifth in Open. 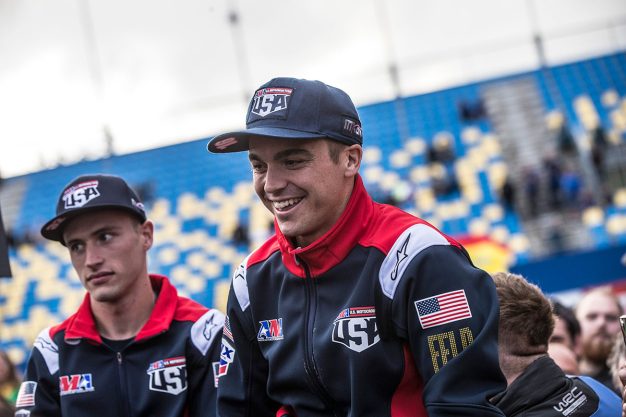 For Anderson, his second outing was far less eventful and was able to deliver a clean opening lap to slot inside the top 10. He held P6 throughout the mid-part of the race before taking the checkered flag eighth, landing sixth for the day in MXGP.

When the final scores were confirmed, Team USA completed the event in sixth position, equal on points with Team France for P5. The event was ultimately won by The Netherlands who delivered unrivalled consistency to dominate proceedings on their home soil, thanks to the line-up of Jeffrey Herlings (MXGP), Calvin Vlaanderen (MX2) and Glenn Coldenhoff (Open).