Gajser emerges on top in intense MXGP of Charente Maritime 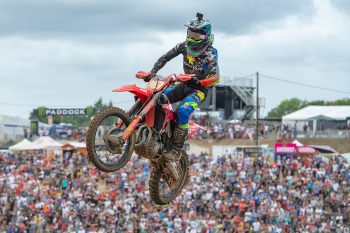 An intense MXGP of Charente Maritime saw champion Tim Gajser emerge on top, as an overall victory for Tom Vialle shapes a thrilling conclusion to the MX2 title fight following round 17.

Jeremy Seewer (Monster Energy Yamaha MXGP) grabbed the holeshot in the opening premier class bout and withstood the hard-charging Gajser to take a narrow 0.983s victory – his fifth win of the season. Romain Febvre (Kawasaki Racing Team) was P3 after running second in the early stages.

Race two and it was Gajser (Team HRC) who reigned supreme following a thrilling last lap that saw the number 243 go from third to first, passing both Seewer and Jorge Prado (Red Bull GasGas Factory Racing).

After grabbing the holeshot and leading a majority of the outing, Prado was second, closely followed by Seewer. Gajser scored overall victory ahead of Seewer, as Prado’s P2 in the final moto elevated him to third for the day with 4-2 moto scores. Febvre (3-4) was fourth for round 17, as Maxime Renaux (Monster Energy Yamaha MXGP) completed the top five with 5-4 finishes.

With the MXGP World Championship already wrapped up by Gajser in Finland, Seewer is a guaranteed second with a 58-point advantage ahead of Prado. The battle for P3 is tight, however, with just four points separating fourth-placed Glenn Coldenhoff (Monster Energy Yamaha MXGP) from the GasGas rider. 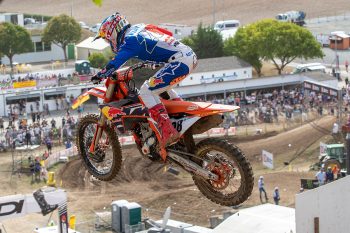 An MX2 overall victory for Vialle (Red Bull KTM Factory Racing) at the penultimate round of the season allowed him to claw back vital points on title-rival Jago Geerts (Monster Energy Yamaha MX2).

Thibault Benistant (Monster Energy Yamaha MX2) led each lap to take the moto one victory, ahead of Vialle and Geerts – the top three separated by less than three seconds.

Vialle swiftly made his way to the front in race two and went on to secure a 5.4s win, with Benistant P2 and KTM-mounted Tom Guyon delivering a breakout performance to finish third. It was a tough outing for Geerts, who crashed twice en route to P7.

The moto two victory granted Vialle the overall on countback over Benistant, as Geerts P3 in the first moto was enough to carry to a top-three overall position on the day. Guyon was P4 for the round, ahead of Liam Everts (KTM) who completed the top five with 7-6 finishes. Just two points separate Vialle and red plate-holder Geerts entering Turkey’s final round of the 2022 championship. 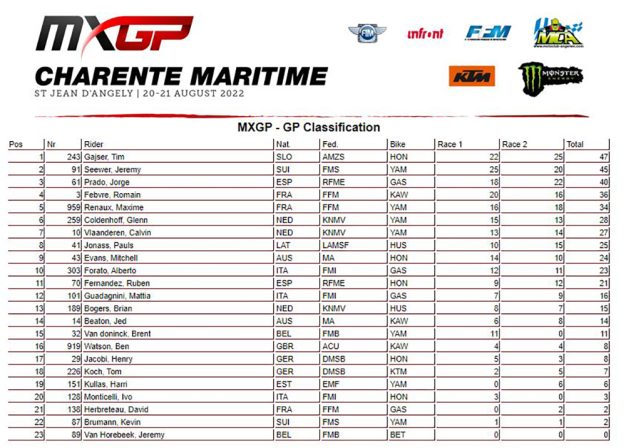 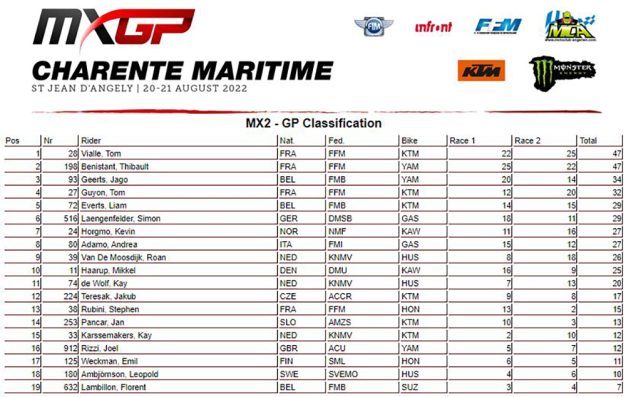