Direct updates from round 10 of the season in Maryland.

Follow the 2022 Lucas Oil Pro Motocross Championship with direct updates from round 10 of the season at Budds Creek through Racefeed. 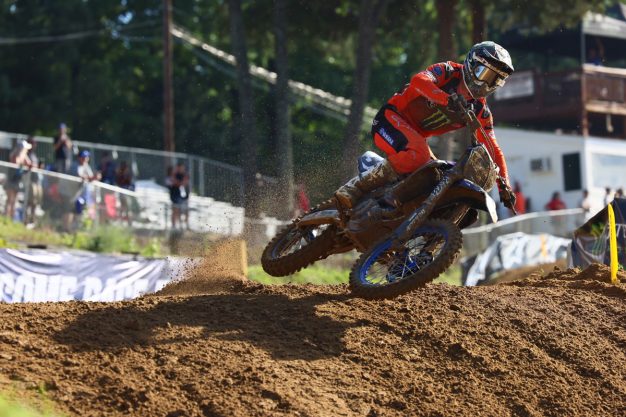 250MX moto one:
Rockstar Energy Husqvarna rider RJ Hampshire took his first race win of the season by claiming the victory in the opening 250MX race. Hampshire took the holeshot, but it was short-lived as TLD Red Bull GasGas’s Michael Mosiman quickly swept into the lead. On the opening lap Jalek Swoll (Rockstar Energy Husqvarna) fell from third and took down Monster Energy Star Yamaha Racing’s Justin Cooper, in the process. Mosiman surrendered the lead to Hampshire midway through the race, with Team Honda HRC’s Jett Lawrence also gaining finding his way past the GasGas rider into P2 after a spirited battle. Hampshire wasted no time stretching out a comfortable seven-second lead over the Australian, as Jo Shimoda (Monster Energy Pro Circuit Kawasaki) passed Maximus Vohland (Red Bull KTM), for fourth, then got embroiled in an intense 15-minute battle with Mosiman to eventually work his way into third. Hampshire would take his first race win of the year with an eight-second victory over Lawrence, with Shimoda third, Mosiman fourth and Vohland fifth. Monster Energy Star Yamaha Racing’s Spanish fill-in rider finished an impressive sixth, ahead of his team-mate Nate Thrasher. Team Honda HRC’s Hunter Lawrence finished a frustrating P8 after two crashes, with Cooper and Cameron McAdoo (Monster Energy Pro Circuit Kawasaki) completing the top 10.

250MX moto two:
Jo Shimoda put in a solid ride to take the checkered flag in the second 250MX moto. Cooper claimed the holeshot of the second 250MX moto, closely followed by Swoll and Vohland, but it was Shimoda who made the early moves slicing his way into second before the first lap was completed. A lap later he briefly took over the lead before Cooper struck back quickly to regain P1. Halfway through the race Shimoda put on another charge and again jumped past Cooper into the lead, but this time the Yamaha rider didn’t put up a fight. Further back, Jett Lawrence, who was squeezed off the start, made a series of rapid passes to work his way up to fifth with 10 minutes remaining, before Hampshire made a move on Cooper to take over P2 and the Budds Creek overall. Shimoda would take a comfortable seven-second victory over Hampshire, while Lawrence made two late passes on Swoll and Cooper to finish third in the moto and third overall. Cooper, Nate Thrasher (Monster Energy Star Yamaha Racing) Mosiman and Vohland would finish P4 to P8. A series of mistakes saw Hunter Lawrence finish ninth, ahead of Carson Mumford (BarX Suzuki).

450MX moto two:
Chase Sexton bounced back to claim the victory of a wild second 450MX moto. Savatgy scored the holeshot, but it was Dungey who quickly jumped into the lead, with Roczen close behind. The duo diced hard, with Roczen launching past Dungey for P1 on the third lap. Anderson and Sexton also made short work of Dungey to move into the top three, with Anderson then surging past Roczen for the lead. Midway through the moto Sexton put in a hard push to head the field, but crashed shortly afterward, shuffling him behind Anderson and Roczen again. Sexton went back to work and would eventually regain the lead and take a 4.2 second victory from Anderson, who’d claim his second overall win of the year with his 2-2 results. Roczen and Dungey finished third and fourth, ahead of Tomac, who worked his way from 13th to fifth, despite struggling with a paddle rear tyre on the hardpack conditions. Savatgy, Craig, Barcia, Plessinger and Fredrik Noren (BBMX KTM) rounded out the top 10.