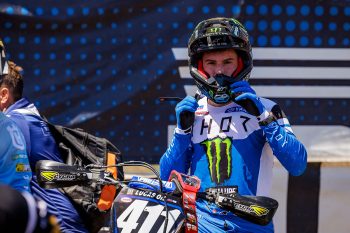 Romano, 17, has been a standout in 250MX this season, finishing fourth in moto one at Unadilla last weekend and currently 13th overall in the standings.

“Well, they say this sport is full of highs and lows and that it is,” Romano announced. “Had a small crash Tuesday and tucked the front-end over a roller. That resulted in a ulnar collateral ligament tear in my left thumb that requires surgery.

“Sucks to end the season like this after a helluva weekend at Unadilla, but one thing I can say is that this is just fuelling the fire for next year. Dirt bikes will get ya, but man I’m already looking forward to dropping the gate in some SX.”

In place of Romano, Spaniard Guillem Farres will join Monster Energy Yamaha Star Racing in 250MX to make what will be his debut in Lucas Oil Pro Motocross at Budds Creek on Saturday.