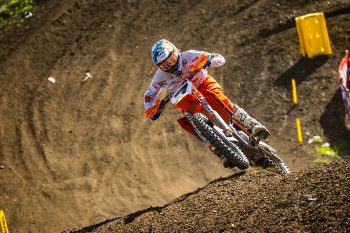 This year marks the 26-year-old’s first campaign with the Austrian manufacturer, with the brand also rolling out a heavily updated premier class platform to be used for the AMA season.

Plessinger has finished between P7-9 for a majority of the 450MX motos thus far, with a notable exception being race two at Southwick where he scored his first podium of the season in third. During the following two rounds, AP was unable to land inside the top five but rebounded in New York to cross the line fourth in the final bout.

“It was a pretty good day!” Plessinger recalled. “I got a pretty good start in the first moto and kind of pumped up in the middle, and went from fifth to seventh.

“We didn’t really make too many changes in the second moto and I got a really good start – I was right there with Eli [Tomac], and then Chase [Sexton] got by me and I was trying to follow his lines but he was on another level today.

“I kind of dropped back a bit in the middle and with about five laps to go, I really, really picked it up and tried to get Jason [Anderson] back. I made up good time but still finished up fourth.

“It was really good, better than my last few motos, and we’re making really good progress with the bike, so I’m really pumped and looking forward to Budds Creek.”

Round 10 of the 2022 Lucas Oil Pro Motocross Championship takes place this Saturday at Budds Creek, with Plessinger entering the event seventh in the 450MX standings.