A commanding double victory for Chase Sexton saw the Team Honda HRC rider retake the 450MX red plate at Unadilla, as Monster Energy Pro Circuit Kawasaki’s Jo Shimoda returned to the 250MX top step at round nine of the 2022 Lucas Oil Pro Motocross Championship. Both riders were available to the media after the races for this Debrief feature.

Chase you had a fantastic day, a day most riders dream of. What is it that you like about Unadilla so much and what was so special about today?

I’ve always liked this track, I think this was my fifth time here. Today was a lot different, I think every year I’ve come here it’s either rained before we came here or it was raining, so it made it softer and more rutted than today. In practice I was really struggling with that, it being drier and choppy. We had to make a decent amount of bike changes compared to what I have been, and it was good. I didn’t change from moto one to moto two, which was nice. But yeah today was awesome. I like the rutted conditions, it’s kind of what I grew up riding on more hardpack longer ruts and that paid off today. I felt really comfortable even though the track could bite you really easily. I had a few close calls, especially in the first moto. You really had to be on your game. Today was one of those days where I felt like I was, not cruising, but I felt like I was in control and I was flowing really well.

With the track conditions today, you said it’s not what you traditionally see at Unadilla. That being said, from the morning when saw the track, to the race, what did you change on the bike and what did you think?

Yeah it was more back to how Unadilla used to be, from back in the day when it was grass, kind of, I mean not totally because it had been ripped, but the first lap we were kicking up dust and it was kind of powdery. It was not super deep compared to what I was used to in the past. That was something I had to adjust to, I was coming here expecting really long ruts and it being somewhat soft. I don’t think they have had much rain here and it’s kind of hard ground once you don’t have any rain. They did the best they could, when they ripped it after practice I knew it was going to be better for the motos, but it still got pretty choppy. I think they did a good job. It was consistent at least, it wasn’t deep in some spots and then slick in others. It was kind of overall hard-packed and it had a lot of options for lines, so that was nice.

You mentioned bike set-up, small adjustments between practice and the first moto?

Yeah, I just had to free up the bike, it felt pretty rigid in practice. I was kind of riding like a hack and that didn’t really help that. I had to tell myself to be a little bit more patient and not override the track because that was really easy to do today. That was one change, and just freeing up the bike a little bit, not being so… it felt pretty dead and stiff. Normally with different tracks when they are softer you can get away with that, but here you have to have a more free bike, so that’s what we did.

Getting your name on the first-place trophy at an iconic track like this, what does it mean to you?

It means a lot, this is one of my favorite tracks to come to and it has lot of history. I got on the podium here, I think in 2019, and last year I had a good race but first one I crashed myself out. I have wanted to do good here for a long time. When it used to be grass at the start, it was just a different race and it was cool to see. I remember when Ricky [Carmichael] and James [Stewart]… James landed on Ricky here, it’s kind of an iconic track and it’s had a lot of great races. For me, the layout is awesome. I got to go over on the top of the hill for a Monster Energy thing, and I got to check out the track from up there and it’s pretty cool, it’s a beautiful place. I’m pumped to get the win and happy to do it here.

Is there any section of Unadilla that makes it unique, and if you could change any part of the track, what section would that be?

I would say Screw U, it’s something we don’t really see and it’s really steep, and it’s pretty slow, there’s not much you can really do. You can over ride it easier… the slower you go, the easier and faster it is. You lose so much time going up that hill. That, and the roost here, I ate a lot of roost in that first moto and my arms and stuff don’t look good right now. Washougal probably gets just as bad of roost, it’s really firm dirt. Here, the rocks, 450 roost is not fun to eat for 35 minutes. You can’t really change the roost that much, but I’ve always enjoyed coming here, it’s a unique track and I think it’s different than a lot of them.

Are you looking forward to Budds Creek?

Budds Creek is fun, it’s got really good dirt and it’s one of my favorites. The last three [rounds] are really good tracks. I wouldn’t say Pala is my favorite but I seem to like that track [results-wise]. So the last three, Budds Creek, Ironman and Pala, especially Ironman and Budds Creek are two of favorite tracks. Budds Creek, it’s going to be hot, so that’s going to be interesting. We haven’t had really had a hot race this year, and I’m assuming we are going to get some coming here towards the end. I’m looking forward to that. Budds Creek has a good layout, good flow, and it’s a lot slower, which is nice. It’s high speed, which I don’t really love, it definitely makes you ride a little bit tighter. I’m looking forward to the rest of these rounds. 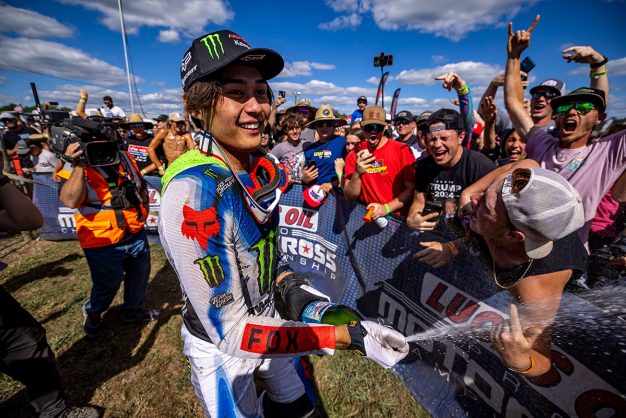 Jo, your second win and you did it at Unadilla. Are you familiar with its history?

To be honest, not really. It’s cool, I don’t know too much about the history but on any track I go to I just focus on doing my best and getting the overall is always great.

Going from different tracks each week, how does your bike set-up change? In particular Unadilla, with the track not shaping up as it usually does?

Yeah, I do change small things. For example at Washougal, I really struggled to set-up the bike coming into the corners, so I didn’t really have comfort. We worked on it during the break, which made it a little bit better and today I think it kind of showed.

Did you not know you had the overall win you were battling with [Cameron] McAdoo, or did you just want to pass him because he’s your teammate?

I kind of knew the situation this time, I know Justin [Cooper] was leading and all I needed to do to get the overall was just finish fourth or better. But, every moto I just try and improve and bring my best. That’s all I am doing right now.

Is there any section of Unadilla that makes it unique, and if you could change any part of the track, what section would that be?

The U-turn where you go down [Screw U], it literally screws you.

Coming up next, Budds Creek, how do you like that one?

I like Budds Creek, just every year it is super hot there. That’s the only problem, everything else is fine.

In Japan, I know it gets very humid in the summer. Do you feel like you do well in humidity, or now you have been in California so long you don’t really want the humidity?

I mean Cali is pretty hot too, just not as humid. It’s kind of like a burning hot. We will see.

You are quite close with Hunter now, with another little mishap there. You are 14 points behind him for second place. Did you think that was possible just a few weeks ago?

Like I said, the positions, the points, it’s kind of far. I don’t really look at it, I just try to do my best every weekend. That’s my goal right now.

Do you feel like you are improving each week?

Yeah, especially my starts. First moto I almost got the holeshot, third place is like a holeshot to me.