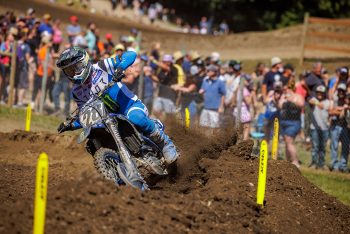 It was ‘survival mode’ for Christian Craig at Unadilla after a heavy practice crash left him debating whether he should compete in round nine of the 2022 Lucas Oil Pro Motocross Championship.

Despite the hard impact after landing awkwardly on the step up, the Monster Energy Yamaha Star Racing rider opted to soldier on and qualified P12.

The first moto saw Craig finish 11th before an improved opening lap in the second race helped him secure P9. He was 10th overall for the round, but importantly scored 22 points to maintain fifth place in the 450MX standings.

“The day started off pretty rough,” Craig recalled.  About the third lap of practice, I had a big crash. It caught me off guard and slammed me to the ground pretty hard.

“From there, it was just survival mode. I was debating whether or not to sit out and rest for a couple of days, but we gutted it out, and I got through the motos.

“The first moto was definitely rough and I pretty much rode around in 11th. In the second moto, I got off a little bit better on the start and was able to get up to ninth. Now I’ll just need to recover and get ready for Budds Creek.”

Craig likely has just three Pro Motocross rounds remaining onboard the YZ450F before he makes a highly expected switch to compete in the premier class with Rockstar Energy Husqvarna Factory Racing from 2023. He is also in the frame to represent Team USA at this year’s Motocross of Nations (MXoN) in MX2.