Moto one of 450MX saw defending champion Dylan Ferrandis (Monster Energy Yamaha Star Racing) jump out front on return, before top-qualifier Ken Roczen (Team Honda HRC) took his turn at the front before the first lap was out.

It was then red plate-holder Tomac who made his move and led for the following 15 minutes, until a charging Sexton saw him slice his way from as far back as P6 on the opening lap through to the front and that’s how it would stay.

Sexton made a statement with his come-from-behind moto win, eventually 12.858s up on Tomac, with Monster Energy Kawasaki’s Jason Anderson keeping the fast-finishing Ferrandis at bay for third position.

This afternoon’s final encounter looked like it was going to be a dual between Sexton and Tomac, however, once again once Sexton caught his title-rival he made the pass and stretched his advantage from there. The final buffer on Sexton’s side was 15.852s over Tomac, as Anderson in P3 mirrored the opening race podium.

Plessinger impressed on his way to fourth this time around, with Barcia another improver for fifth, almost directly ahead of Dungey and Roczen. The top 10 was completed by Savatgy, Christian Craig (Monster Energy Yamaha Star Racing) and teammate Ferrandis.

The round podium was naturally made up of Sexton, Tomac and Anderson, while in the championship standings it’s now Sexton back on top by a single point over Tomac with three rounds remaining in the season. Next stop, Budds Creek this coming weekend. 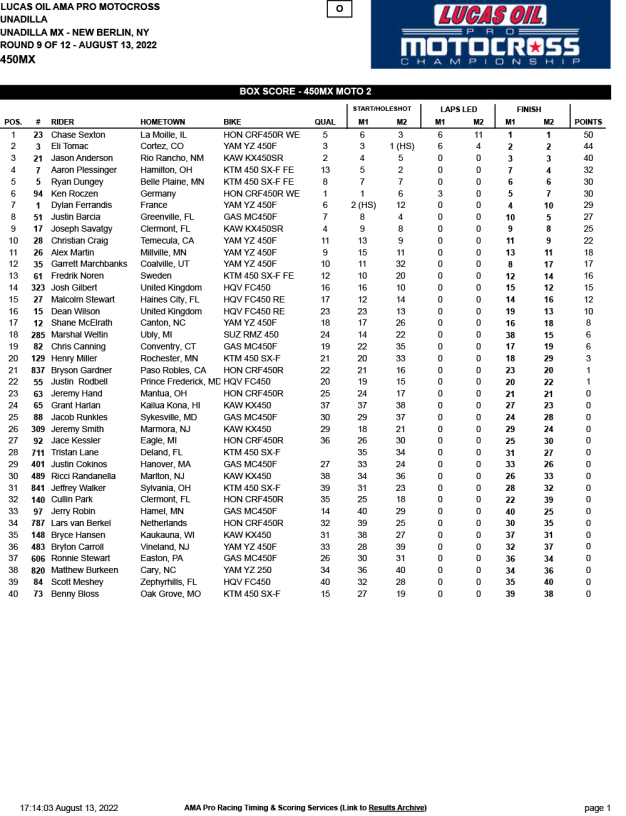