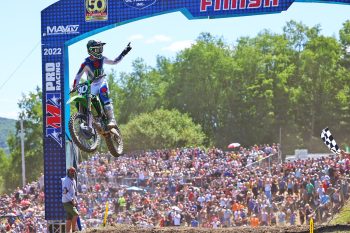 It was Monster Energy Pro Circuit Kawasaki’s Cooper who led the initial stages of 250MX moto one, until a costly mistake saw him go down and hand the lead to Shimoda in the process.

From that point, Shimoda took control and powered away at the front while his rivals came undone in giving chase. In the end, the winning margin of Shimoda was 7.840s ahead of Hunter Lawrence (Team Honda HRC), with RJ Hampshire (Rockstar Energy Husqvarna) fighting hard on his way to third position.

It was also a strong ride from Nick Romano (Monster Energy Yamaha Star Racing) in his home round for P4, with Cooper recovering to claim fifth. Red Bull KTM’s Max Vohland was sixth after fending off Jett Lawrence (Team Honda HRC) on the final lap, which came after the latter fell out of podium contention – not once, but twice in the middle stages of the moto.

The second moto was led by Cooper from the outset with the Lawrence brothers in tow – Jett the primary chaser and Hunter directly behind him. There was no catching Cooper, however, sprinting to a 7.037s advantage to rebound following his troubled opening moto.

Despite going down once again in this moto, Jett held on for the runner-up position in the moto, with Shimoda clawing his way to P3, which was enough to clinch the overall.

Cameron McAdoo was fourth after teammate Shimoda’s final lap pass on him, as Hunter Lawrence wound up fifth after going down during the moto and experiencing some sort of rear brake drama in the late stages. Sixth through 10th included Vohland, Thrasher, Hampshire, Romano and Brown.

The overall podium belonged to Shimoda, from Cooper and Hunter Lawrence, while Jett still leads the standings after claiming fourth today. He has a 26-point advantage over Hunter, with Shimoda currently 40 in arrears leading into Budds Creek next weekend. 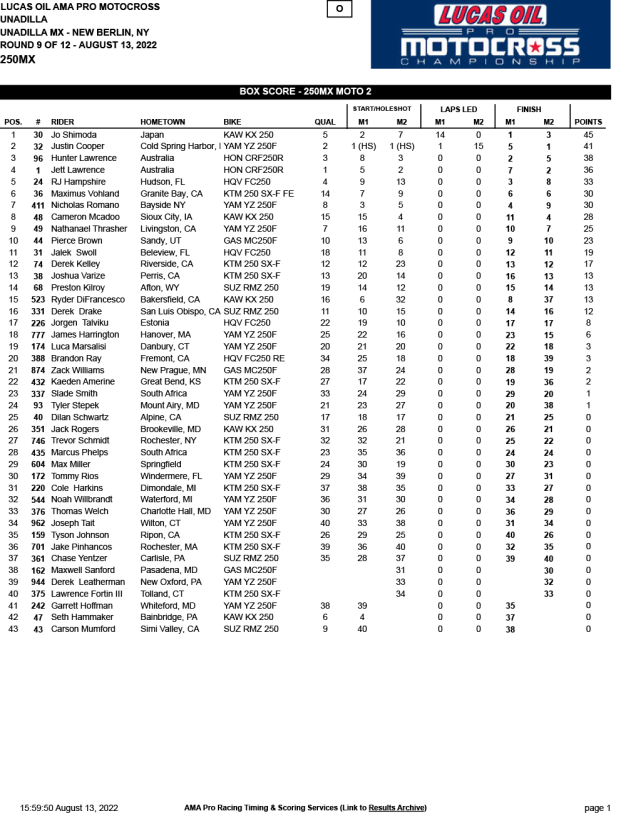