Direct updates from round nine of the season in New York.

Follow the 2022 Lucas Oil Pro Motocross Championship with direct updates from round nine of the season at Unadilla through Racefeed. 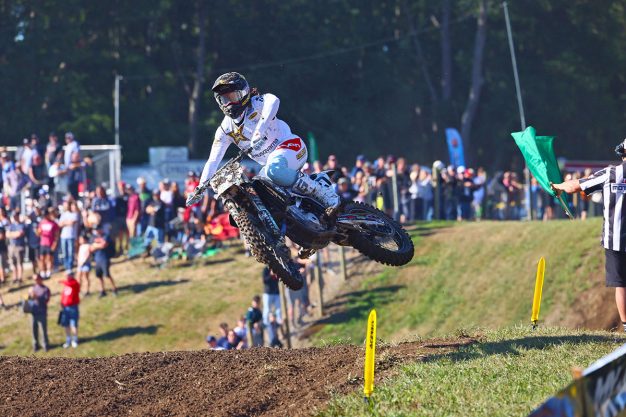 250MX qualifying:
Carrying a 28-point lead into the season’s ninth round, Jett Lawrence continued to assert his dominance by topping the 250 category in qualifying for the third time in 2022. The Team Honda HRC rider turned in a 2m12.777s on his final lap, putting an impressive 1.748 seconds between himself and Justin Cooper, who went second fastest for Monster Energy Star Racing Yamaha. Hunter Lawrence (Team Honda HRC), RJ Hampshire (Rockstar Energy Husqvarna) and Jo Shimoda (Monster Energy Pro Circuit Kawasaki) completed the top five, with Lawrence and Shimoda the only two to improve upon their time from the morning’s first session in the second outing. Returning from injury, Monster Energy Pro Circuit Kawasaki rider Cameron McAdoo landed 15th on the combined timesheet, six and a half seconds off the session-leading time. Ryder DiFrancesco, fresh off the Monster Energy AMA Amateur National Motocross Championship, was one spot behind McAdoo in 16th.

450MX qualifying:
Monster Energy Kawasaki’s Jason Anderson set the high mark in the closing moments of the second 450MX qualifying session with a 2m14.840s, but Ken Roczen’s 2m14.543s from the first session ensured a qualifying sweep of both classes for Team Honda HRC. Roczen and Anderson were the only two 450 riders to dip into the 2m14s range, with Joey Savatgy (Monster Energy Kawasaki) setting the third-fastest time six-tenths of a second back from Roczen. Championship rivals Eli Tomac (Monster Energy Yamaha Star Racing) and Chase Sexton (Team Honda HRC) rounded out the top five ahead of returning Monster Energy Yamaha Star Racing rider and reigning class champion Dylan Ferrandis. In their first race back with Rockstar Energy Husqvarna Factory Racing, Malcolm Stewart and Dean Wilson landed 22nd and 23rd, respectively.

250MX moto one:
It was Cooper who led the initial stages of 250MX moto one, until a costly mistake saw him go down and hand the lead to Shimoda in the process. From that point, Shimoda took control and powered away at the front while his rivals came undone in giving chase. In the end, the winning margin of Shimoda was 7.840s ahead of Hunter Lawrence, with Hampshire fighting hard on his way to third position. It was also a strong ride from Nick Romano (Monster Energy Yamaha Star Racing) in his home round for P4, with Cooper recovering to claim fifth. Red Bull KTM’s Max Vohland was sixth after fending off Jett Lawrence on the final lap, which came after the latter fell out of podium contention – not once, but twice in the middle stages of the moto. The top 10 was completed by Ryder DiFrancesco, Pierce Brown (TLD Red Bull GasGas) and Nate Thrasher (Monster Energy Star Racing Yamaha). Unfortunately for Seth Hammaker (Monster Energy Pro Circuit Kawasaki), he went down on lap 11 and was ruled out of the moto altogether.

450MX moto one:
Moto one of 450MX saw defending champion Ferrandis jump out front on return, before top-qualifier Roczen took his turn at the front before the first lap was out. It was then red plate-holder Tomac who made his move and led for the following 15 minutes, until a charging Sexton saw him slice his way from as far back as P6 on the opening lap through to the front and that’s how it would stay. Sexton made a statement with his come-from-behind moto win, eventually 12.858s up on Tomac, with Anderson keeping the fast-finishing Ferrandis at bay for third position. Behind Ryan Dungey (Red Bull KTM) in fifth, Roczen would end up fading to sixth by race’s end, in turn ahead of Aaron Plessinger (Red Bull KTM), Garrett Marchbanks (Muc-Off FXR ClubMX Yamaha), Savatgy and Justin Barcia (TLD Red Bull GasGas).

250MX moto two:
The second moto was led by Cooper from the outset with the Lawrence brothers in tow – Jett the primary chaser and Hunter directly behind him. There was no catching Cooper, however, sprinting to a 7.037s advantage to rebound following his troubled opening moto. Despite going down once again in this moto, Jett held on for the runner-up position in the moto, with Shimoda clawing his way to P3, which was enough to clinch the overall. McAdoo was fourth after teammate Shimoda’s final lap pass on him, as Hunter Lawrence wound up fifth after going down during the moto and experiencing some sort of rear brake drama in the late stages. Sixth through 10th included Vohland, Thrasher, Hampshire, Romano and Brown. The overall podium belonged to Shimoda, from Cooper and Hunter Lawrence, while Jett still leads the standings after claiming fourth today. He has a 26-point advantage over Hunter, with Shimoda currently 40 in arrears.

450MX moto two:
This afternoon’s final encounter looked like it was going to be a dual between Sexton and Tomac, however, once again once Sexton caught his title-rival he made the pass and stretched his advantage from there. The final buffer on Sexton’s side was 15.852s over Tomac, as Anderson in P3 mirrored the opening race podium. Plessinger impressed on his way to fourth this time around, with Barcia another improver for fifth, almost directly ahead of Dungey and Roczen. The top 10 was completed by Savatgy, Christian Craig (Monster Energy Yamaha Star Racing) and teammate Ferrandis. The round podium was naturally made up of Sexton, Tomac and Anderson, while in the championship standings it’s now Sexton back on top by a single point over Tomac with three rounds remaining in the season.