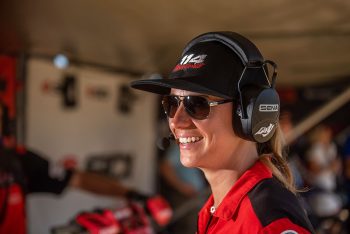 The 10th and final licensed team has been confirmed for the FIM World Supercross Championship (WSX), being Italian effort Honda Nils under the management of former world champion Livia Lancelot.

Lancelot has been team manager of the Honda 114 Motorsports MXGP program in recent seasons and will now carry that over to the Honda Nils organization in WSX.

“We are excited to get to work and believe we will make a strong showing during the pilot FIM World Supercross Championship season,” said Lancelot. “Our off-season is only a few weeks, so we are quickly working to get riders and crew members under contract and bikes ready to race, all while tackling the logistics a global series requires. It’s a great challenge and we are ready to face it.”

SX Global motorsport managing director Adam Bailey added: “We are incredibly excited to have Honda Nils join us on our journey. Our pilot season boasts strong teams from the US, France and Australia, fielding incredible riders from across the globe.

“Having a trailblazer like Livia Lancelot, who has contributed so much to the sport both on and off the race track, serving as team manager adds another layer of excitement and intrigue around this team and our series.”

The 2022 WSX Championship’s pilot season will commence with the British Grand Prix at Cardiff’s Principality Stadium in Wales on 8 October. Australia has been announced for 21 October, while a third round is yet to be confirmed.