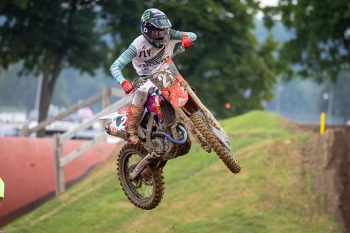 It was a challenging week for Hymas at Loretta Lynn Ranch, finishing P9 in Open Pro Sport and sixth in 250 Pro Sport after being hotly tipped as a favourite for both categories.

Set to contest the final four rounds of 2022 250MX with Team Honda HRC, Hymas and the team decided to put his professional debut on hold and use the time to rebuild his form. He is scheduled to compete in Pro Motocross with the squad from next year.

“Only up from here!” Hymas shared. “Bummed about my performance at LL [Loretta Lynn’s] is an understatement. Back to the drawing board and gonna keep working!

“With that being said, my team and myself have decided it’s best that I don’t race the upcoming Pro Motocross rounds and I take this time to get myself back to 100 percent. Thank you to everyone for the support, I couldn’t do it without you guys.”

Following a three-week break, Lucas Oil Pro Motocross resumes this Saturday at Unadilla for round nine of the 12 round series.