Aims to maintain top-10 position in 450MX points with another fill-in deal. 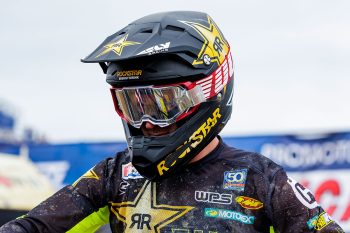 McElrath turned in a season-best result of seventh at the Detroit Supercross before an injury kept him sidelined until late in the year when the Rocky Mountain ATV/MC-KTM-WPS team ceased operations.

His next gate drop came at the Fox Raceway 1 season-opener as the lone factory Husqvarna 450MX representative with Dean Wilson and Malcolm Stewart out.

Leading into the Unadilla National, the 27-year-old North Carolina native sits 10th in the 450 class points standings and was prepared to do things the hard way to see the 2022 season to the end.

“My original plan was to purchase a couple of bikes and go the privateer route,” McElrath declared. “I did not foresee anyone else needing me for only four races. I had the support to do the last four rounds on my own and was one flight away from having all the pieces put in place.

“As the lord would have it, I was talking to Brandon [Haas, ClubMX owner] on a different topic when he was notified that [Phil] Nicoletti was not able to line up for the balance of the season, recovering from a broken arm. One thing led to another and he offered me the spot.”

The high mark of McElrath’s rookie 450 outdoor season to this point is his eighth-place overall finish at Thunder Valley, on the strength of a run to fifth in the second moto. He’ll aim for a similar result this weekend, eight years after earning his first top 10 as a professional, fittingly at Unadilla. McElrath trained at ClubMX as an amateur from 2011 to 2013.

“I have known Shane for long time and I knew he would be great,” said team owner Haas. “We did not have the platform to support him at the pro level at the time, so I was happy when he got his TLD deal.

“I knew in my heart that one day our paths would cross where he could ride for our team and that time is now. He is a great guy and deserves the best this sport has to offer. The timing was right to give him a shot and we are in the position to do it with good equipment.”

Though he didn’t have to resort to a privateer effort to close out the season, McElrath did require approval from his personal sponsors to join the ClubMX team. With that out of the way and an acclimation period with the Yamaha complete at the ClubMX facility, McElrath will line up at Unadilla on Saturday, August 13.