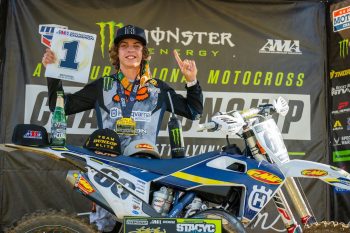 A solid week at the Ranch put Monster Energy Kawasaki Team Green’s Ryder DiFrancesco in position to wrap up one of Loretta Lynn’s most high-profile titles on the penultimate day.

A moto win and a runner-up finish provided a much-needed edge entering moto three, but he still needed to put forth another high-level performance in order to potentially secure his first 250cc crown. Unfortunately for DiFrancesco, the heartbreak of racing left him wondering what could have been at the end of the moto.

As the gate dropped on moto three, the rider most expected to also be in the championship hunt, Monster Energy Star Yamaha Racing’s Haiden Deegan, vaulted out to the early lead. Due to a DNF in the opening moto Deegan was not in the mix for the title, but the final moto presented an ideal opportunity to leave a lasting impression on the Ranch.

As Deegan led the way, the trio of championship hopefuls slotted in behind him and engaged in a tense battle. Bennick and Boespflug occupied the remaining podium spots, with Ferry right behind. These three riders continued their fight until Ferry encountered misfortune and went down, which dropped the Yamaha rider outside the top 10.

With Ferry out of the picture, the title fight came down to Bennick and Boespflug. After persistent pressure, Boespflug got the opening he needed halfway through the moto and made the pass for second. Deegan extended his lead in the late stages of the moto and wrapped up a challenging outing in 250 B with his first moto win in the class.

Boespflug finished in second, with Bennick third. By virtue of his 4-1-3 moto finishes Bennick secured his first big bike title at Loretta’s and the fifth championship there of his career, with his moto two win proving invaluable in edging out Boespflug by a single point.

After a dominant Thursday in which he captured two moto wins, Husqvarna Factory Amateur Race team rider Casey Cochran entered Friday’s final moto of the 125 Jr. (12-17) B/C class with a ton of confidence, some late week momentum, and a comfortable lead in the overall standings.

Captivating battles highlighted both 85cc (10-12) and Mini Sr. 1 (12-14) all week long and culminated with a pair of thrilling final motos on Friday that didn’t see either championship contender at the head of the pack.

In the 85cc (10-12) class Monster Energy Kawasaki Team Green’s Caden Dudney entered moto three with a two-point advantage over KTM Orange Brigade’s Seth Dennis. The two riders had been the ones to beat with every gate drop, but when the checkered flag flew it was Husqvarna-mounted Vincent Wey that won the moto, but Dudney who prevailed with his third Loretta Lynn’s title.

Later in the afternoon both Dudney and Dennis returned to the starting gate for the final Mini Sr. 1 (12-14) moto. This time Dennis held the slight upper hand with a single-point edge over Dudney, which meant the better finisher would ultimately secure the title.

A come-from-behind runner-up effort by Dudney – behind RJR Motorsports KTM’s Cole Timboe – was enough to secure another championship, with an eight-point margin over Dennis.