Getting down to the business-end of AMA Amateur National Motocross Championship. 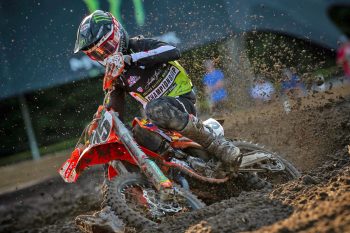 The journey to crown 36 national champions took another big step on Thursday at Loretta Lynn Ranch, as the second moto for 23 classes unfolded in the 41st running of the Monster Energy AMA Amateur National Motocross Championship.

The third day of racing was destined to be one of the most important outings of the week as every gate drop played a key role in how the championship battle in each respective class will play out.

250 B returned to the starting gate for its second moto still very much up for grabs and KTM Orange Brigade’s Daxton Bennick won ahead of Monster Energy Star Yamaha Racing’s Haiden Deegan – who DNF’d moto one – and NSA Yamaha Factory Amateur Team’s Evan Ferry.

The three-rider trio of NSA Yamaha Factory Amateur Team’s Logan Best, Monster Energy Husqvarna’s Casey Cochran and BJ Stevens Inc. KTM’s Noah Stevens asserted themselves at the head of the pack in the opening motos of both 125 Jr. (12-17) B/C and Schoolboy 1 (12-17) B/C.

Their impressive rides set the stage for two compelling title fights that were sure to take an intriguing turn on Thursday as both classes contested their second motos. As 125 Jr. (12/17) BC ended, Cochran won ahead of Stevens and KTM-mounted Klark Robbins, while Best had to settle for 13th following an early mishap.

Brimming with confidence, Cochran carried that momentum into Moto 2 of Schoolboy 1 (12-17) B/C and repeated atop the podium from Best and Stevens. The impressive efforts by Cochran has put him in control of the overall classification in both classes.

The Mini St. 1 (12-14) rivalry between Monster Energy Kawasaki Team Green’s Caden Dudney and KTM Orange Brigade’s Seth Dennis continued on Thursday and it was Dennis who took P1 in front of EBR Performance KTM’s Kannon Hargrove and Dudney. A single point separates Dennis and Dudney heading to the final moto.