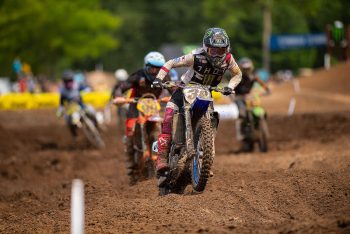 Another full slate of racing was on deck Wednesday at the 41st running of the Monster Energy AMA Amateur National Motocross Championship from Tennessee’s Loretta Lynn Ranch.

The morning half of the day’s races completed the opening set of motos for all 36 classes and the afternoon saw the start of the second motos for nine classes, in which the championship battles started to take shape.

Many of the star-studded prospects in 250 Pro Sport would take to the track at the Ranch twice on Wednesday, but a major emphasis was placed on the opening moto. It was NSA Yamaha Factory Amateur Team rider Gavin Towers who won over Monster Energy Kawasaki Team Green’s Ryder DiFrancesco, with GasGas Factory Amateur Team rider Caden Braswell third.

Following a tough start to the week in Tuesday’s 250 B opener, Wednesday was a new day and an opportunity for redemption for Monster Energy Star Yamaha Racing’s Haiden Deegan in the first moto of Schoolboy 2 (12-17) B/C. He delivered ahead of KTM Orange Brigade’s Daxton Bennick and KTM Orange Brigade’s Mark Fineis.

After a strong start to his week on Tuesday, NSA Yamaha Factory Amateur Team’s Logan Best entered the first moto of Schoolboy 1 (12-17) B/C with confidence, however, it was BJ Stevens Inc. KTM’s Noah Stevens who won from Best and Monster Energy Husqvarna’s Casey Cochran.

Typically, one of the most competitive races at Loretta Lynn’s, the Supermini classes were expected to see several riders contend for the title. When all was said and done with the opening motos of both Supermini 1 (12-15) and Supermini 2 (13-16) the same four riders occupied the top four positions across both motos.

Leading the way was the KTM duo of Jeremy Fappani and Leum Oehlhof, who traded wins and set the stage for a compelling championship battle. Fappani topped Supermini 1 (12-15) over Oehlhof, with GasGas Factory Amateur Race Team’s Tiger Wood fighting to third.

The head-to-head battle between Fappani and Oehlhof that never came to fruition in the previous moto proved to be the showcase element of moto one in Supermini 2 (13-16). It was Oehlhof who cruised to the moto win, with Fappani second and Wood once again in third.

The first wave of second motos included Open Pro Sport, which brought many of the Ranch’s top riders back onto the track for a second time on Wednesday. All eyes were on DiFrancesco and his Team Green Kawasaki, as he looked to move one step closer to his first big bike crown.

The result of the second moto was one of the most exciting races of the week so far. In his third gate drop of the week Chance Hymas finally put his factory Honda at the head of the pack to open the second moto, but it was Braswell who took P1 ahead of NSA Yamaha Factory Amateur Team’s Jayden Clough and Hymas. DiFrancesco, meanwhile, was fifth.

The battle in the 85cc (10-12) class took quite an intriguing turn during its second moto as each of the division’s three front-runners, Future MX KTM’s Carson Wood, KTM Orange Brigade’s Seth Dennis and Monster Energy Kawasaki Team Green’s Caden Dudney, all faced adversity in moto two.

While Dennis and Dudney were forced to battle through the pack after difficult starts, a dominant performance by Wood came undone when he crashed out of the lead in the waning minutes of the moto. In the end, Dudney took P1 over Monster Energy Kawasaki Team Green’s Ryder Ellis and Fast Company KTM’s Grayson Townsend.