Early 2022 contenders emerge on Tuesday with 20-plus motos contested. 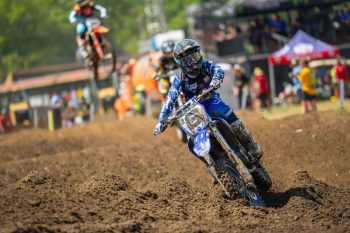 The gates officially dropped on the 2022 Monster Energy AMA Amateur National Motocross Championship at the legendary Loretta Lynn Ranch, with a total of 23 motos completed.

One of the most high-profile divisions is Open Pro Sport and coming into Tuesday’s opening moto the spotlight centered on the rivalry between Monster Energy Kawasaki Team Green’s Ryder DiFrancesco and Team Honda HRC’s Chance Hymas.

Unfortunately, the head-to-head battle so many had hoped for never came to fruition as a challenging opening lap for Hymas left him deep in the field, while DiFrancesco positioned himself near the head of the pack and went on to win ahead of Pure Outlaw Yamaha’s Gage Linville and NSA Yamaha Factory Amateur Team’s Gavin Towers third. Hymas crossed the line 14th.

A pair of second-generation racers headlined the 250 B class for 2022, as both Haiden Deegan and Evan Ferry were set to make their Loretta’s debuts aboard Yamahas. These two up-and-comers were two of the favorites to challenge for the title, with Deegan riding for Monster Energy Star Yamaha Racing and Ferry with the NSA Yamaha Factory Amateur Team.

However, it was MJ Racing KTM’s Matti Jorgensen who won ahead of Monster Energy Kawasaki Team Green’s Preston Boesplfug and Ferry, with Deegan damaging his wheel following an early mishap and being ruled out altogether.

The fortunes of Dennis and Dudney were different to open the 85cc (10-12) moto as neither rider was in contention out front. Instead, it was Future MX KTM’s Carson Wood who emerged on top from Dennis and with Dudney third. While they came up short of the win, both Dennis and Dudney are firmly in title contention.

One of the most wide-open fields at Loretta Lynn’s in 2022 is the 125 Jr. (12-17) B/C class, which is filled with talent but doesn’t necessarily feature a heavy favorite. That sets the stage for one of the most compelling classes to watch unfold in the battle for the championship.

The opening moto of the class was ultimately an uneventful outing for the eventual winner, NSA Yamaha Factory Amateur Team’s Logan Best, leading Monster Energy Husqvarna’s Casey Cochran after he clawed his way through the pack and GasGas rider Landin Pepperd.

In addition, Loretta Lynn’s legend Mike Brown began his quest for more championships on Tuesday, competing twice in the Senior (40+) and Masters (50+) classes. The Tennessee native has amassed seven titles since his first appearance at the Ranch in 2017 and has failed to come out on top just once in eight tries.

Brown was on point to start his journey and amassed a pair of wins on opening day, doing so in emphatic fashion. In his first race of the day in Senior (40+) Brown put himself into the lead from the gate drop and easily distanced himself from the field to take the win by more than half a minute. FXR RMATV/MC Yamaha’s Kris Keefer was P2 ahead of KTM rider Hans Neel.

When he returned for Masters (50+), Brown won from Team Babbitt’s Kawasaki’s John Grewe and RM Army Suzuki rider Barry Carsten, who rounded out the top three.