Signs of progress for Dungey with Washougal uplift 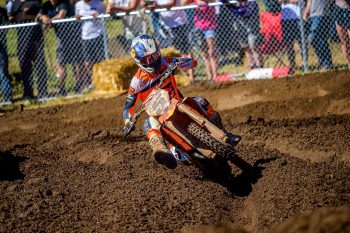 The number five shot to the holeshot in the opening moto at round eight of the 2022 Lucas Oil Pro Motocross Championship and battled closely for the lead with Eli Tomac and Chase Sexton in the opening laps.

Disaster struck shortly after for Dungey and he was forced out of the race with a mechanical issue. In moto two, ninth after the first lap left the 450 SX-F rider to charge through the field, ultimately equalling his season-best result of P4 as he crossed the line just over two seconds shy of the rostrum.

“We had a great week and made some good progress with the bike, which was really positive and it really translated today,” Dungey said. “I got the start in the first moto and man, it was nice running up there with Chase and Eli! We had a little bit of a bike malfunction – you know, it’s dirt bikes – it happens and it’s nobody’s fault.

“Second moto, my gate pick was terrible but I tried to salvage a decent start. The good thing was that I felt really good and the bike was really working, so I could apply myself on the track and start picking those people off. I got up to fourth and I made a run on third but just ran out of time. It’s not where we want to be overall but a positive moving forward is that we’re in a good spot with the bike and the riding was good, so we’ll take it.”

A zero points haul in race one meant Dungey landed P12 overall on the day. He is sixth in the 450MX standings entering the final four rounds of the season.