Preparations begin ahead of 450 class transfer from 2023. 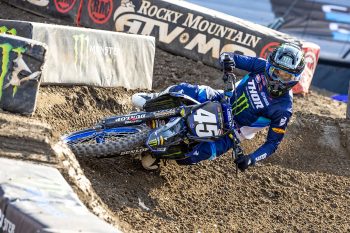 Last year’s 250SX East champion Colt Nichols has revealed he’s been granted an early exit from Monster Energy Star Racing Yamaha in a bid to prepare for his 450 class transition in 2023.

Nichols captured his maiden Monster Energy Supercross title in 2021, but was injured at Anaheim 1 upon switching to the western region and hasn’t raced since.

It was recently announced that Nichols would return to Star Racing in 250MX during the final four rounds of Lucas Oil Pro Motocross after recovering from injury, until he personally announced he has the permission to move on after effectively missing the entire season.

“I wanted to take a minute and bring everyone up to speed on my plans for now and in the future,” Nichols stated. “But first I want to thank Star Racing for all that you have done for me the past six years.

“You all had a big part to play in allowing me to reach one of my childhood goals of becoming a Supercross champion and helping build the foundation that I now having moving forward in my career. I truly could not have achieved these things without your unwavering support.

“Bobby [Regan] kept re-signing me when I got injured, believing I could win a championship one day and I will be forever grateful to everybody apart of Star racing. As much as I am going to miss my Star team, I am really looking forward to my next chapter in my journey as I move up to the 450 class next year.

“And [I am] thankful to Star for allowing me to start this journey early to get a head-start on next season. In the next few weeks I will be able to share more, but you will see me on a new bike/team, gear and all the rest.

“This has been a year I would rather forget, having not been able to truly show what I was capable of, but it only gives me more motivation to make this step into the 450 class a successful one. Thanks to my family, friends, sponsors, and most of all fans for always supporting me through these injuries and comebacks.”

While details remain unofficial, Nichols has been one rider linked to an incoming team understood to be being launched by 83 Compound owner Mark McKenzie, potentially with both Rocky Mountain ATV/MC and KTM support. It’s unclear if Nichols has any World Supercross Championship (WSX) opportunities.