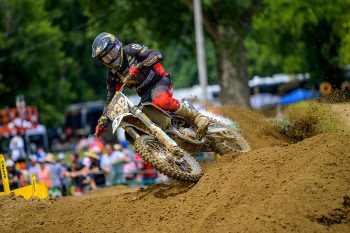 The teenager competed in the Scouting Moto Combine just two weeks earlier at RedBud, where he ran inside the top three in the opening moto before crashing and suffering a hematoma in his leg.

Hawkins was still granted the chance to race Pro Motocross in Millville and made the most of the opportunity while notching 20-15 moto scores thanks to two consistent rides.

“It was so sick,” Hawkins said. “I came into today looking to have some fun and I think I accomplished that goal.

“I didn’t do the best in qualifying but I tried to put it behind me and do as well as I could in the race. I had an awesome day, I ended up with a 20-15, so I’m pretty pumped on that for my first Pro National.”

Hawkins’ attention now turns to the Loretta Lynn’s Amateur National Motocross Championship in early August. Both he and the team will decide after the event if he will return to compete throughout the final four rounds of Lucas Oil Pro Motocross in 2022.