Monster Energy Yamaha Star Racing’s Eli Tomac notched hard-earned 1-1 moto scores to take the 450MX red plate at Spring Creek, as Team Honda HRC’s Jett Lawrence took a double victory in 250MX to extend his advantage at round seven of the 2022 Lucas Oil Pro Motocross Championship. Both riders were available to the media after the races for this Debrief feature. 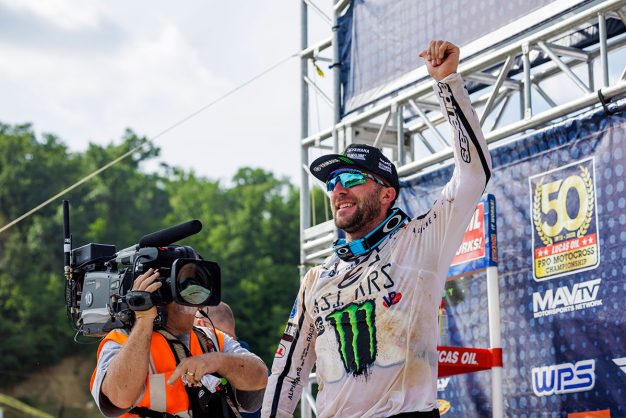 Eli, I think it was 4-3-2, and then you’ve been 1’s across the board since the start of the season. Today a big day gaining the red plate in the 450MX for the first time this season. Talk about that moment and obviously, the point to get up here, and now where do you move from there?

We’ve had, four wins now, so four great races. Today was once again a gnarly battle both motos, I felt like I was a little gifted in moto one there. Chase [Sexton] went by and had some better lines and had a little more pace. Moto two though, I made a couple changes, and then I felt like I was the guy that was able to move around and get to the front. Great work from the team, between moto one and moto two there, and yeah, it’s just been gnarly. The pace is hot and we’re just going to go down to the wire.

It looked like in moto number one, Chase was really fast from the finish line through the sand wash section. Did you do anything to change anything on the bike or how you approached those areas? You didn’t seem to lose much time in moto number two at that point.

When it comes to passing at the right-hander before the finish, you set yourself up very well going to the far outside on the left. It just seemed like a drive. Had you found that earlier, or was that, ‘I’m just going out gas him through this section to get by?’ You set up quite a few passes there.

Yeah, what happened was, the first lap I tried to go around [Joey] Savatgy there and we kind of were crisscrossing down the hill. Then I got shot to the outside and kind of just happened to go over there by chance, and it worked. It only worked though for probably ten minutes and then it went away. It actually got worse, and then I had to go inside. So, that was a changing turn, for sure.

You’ve been in the position of a number of times, holding the red plate. As a rider, would you rather fend off the pressure or put the pressure on like you had to do to Chase in moto number one.

A lot of times, Eli, they say when it’s going to be your weekend, you just have that feeling all weekend long. Did you have that feeling, or was this something you had to truly work hard for? Did you vibe well enough to say, I think I’m going to win it here again?

I had the good feeling in moto two. Moto one getting passed and it’s like, ‘ah, darn it’. But, we’ve been good everywhere. We’ve been good in all conditions, credit to the team.

Southwick is gnarly, physically, and then today you guys had to go to the wall, pushing hard in the second moto. Are there days where you feel it more? Even during this week, where you need to change things this week after Southwick? Does it affect you physically in the days after a race?

Yeah, in my opinion, Southwick is the physically hardest one. I was pretty spent from that one. That one it’s like you can feel your legs into that second moto. To me, this it’s not even close to being as physical, that track versus everything else, Southwick is a beast

You were going as hard as you could in this moto today, but it’s not quite the same?

To me, this situation today would be a higher heart rate, but Southwick it’s physically just draining you. Your muscles are just cooked from doing 3,000 squats going through the rollers.

You have so much experience at this. How much of that is managing that physical load from May to September in this case, and not going over the edge?

That’s the thing you’ve got to know what to do, right? That just comes with experience. It’s so hard, there’s no peaking in this sport, we’ve got to perform 30 weekends a year.

You are as good as you have been all year, in ‘beast mode’. After Washougal, do you take a week off or do you go right back to work in the break?

It’s hard to say, I don’t know what I am going to do, I don’t want to tell these guys.

Alex Martin has announced he’s retiring at the end of the season and this was his last national in Millville. If you have a troll train story, can you share it?

[Laughs] The memory I’m going to have of A-Mart is last week at Southwick, jumping across the banner! He was a little Wide Clyde there. To be honest, that’s the most I’ve been around the guy in the race. I’ve mostly hung out with Jeremy [Martin] more often. Alex seems like a great guy, I hope he enjoys the last few races. 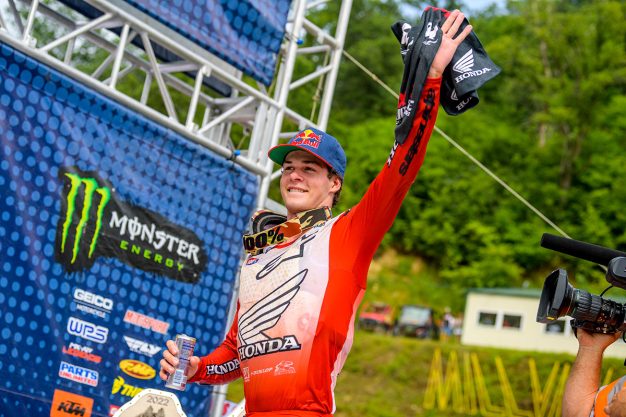 Jett, great starts all day long. Talk us through that first moto, you had to get by Justin Cooper, but I don’t think that’s probably the way you planned to get by him is by going over him in that turn.

Yeah, starts were really good, they were consistent today, I was super happy with that. My motos were definitely a lot better, still have more improvement. We always can improve the moto and ourselves better. I was following him and then I just had nowhere to go, I had to go over his bike. Because his back wheel was spinning, when my back wheel hit it, I ended up knocking it even closer to him. So, it wasn’t ideal, but we got him, at least, we got the position. The first one was definitely a dog fight, tt was a battle through the whole thing, we were there with Hunter [Lawrence]. The second one was a little easier, I got that gap and then it was just kind of maintaining from there to see if Jo [Shimoda] makes a push, or we’re going to have to step it up, or if I could just maintain.

Finding the pace on this racecourse, a little difficult. What would you guys say you were running? 80 percent, 90 percent? How hard were you running this track to finish in the positions that you guys did? It wasn’t an all out, was it?

In the second one, I don’t think it was much of an all-out. There were so many edges, so if you do try to send it, especially down those hills, if you try to jump a bit further you literally land right in the braking bumps where you could land in the face of one and blow your hands off. So, I think this track you definitely have to be a lot faster and send it in certain spots than other spots, because it could really catch you off guard, just because it has a base to it. It has those edges everywhere. Some of them are kind of hidden a bit, some aren’t, so, it’s definitely about more being smart, picking your sections on the track where I kind of go 100 percent and where not to.

Six of seven overalls so far in the 2022 season, 11 wins, looking forward to Washougal next. Was your goal in the second part of the season to be, in a sense, this dominant?

Yeah, it’s definitely cool to be six out of seven, I mean we don’t know what it could have been at RedBud, obviously the bike malfunctioned, which sucks, but that is part of the sport. Jo ended up getting the overall win, so good for him and I mean at Washougal, I sucked there last year so I’m just hoping for a podium really, I suck at those flat, high-speed tracks. We are hoping for a good start, then be as wide as a bus, so, we will see.

Were there any major changes you made between the first and second motos?